Back on Oct. 22, 2012 — the last one — Barack Obama and Mitt Romney went toe-to-toe to the tune(-in) of 59.2 million total viewers. That’s a ton of eyeballs, but it was actually the lowest-rated of their three go-arounds. Expect Donald Trump-Hillary Clinton to put that figure to shame right away, boosted by the unusually high potential trainwreck factor.

Four years ago, the debates were simulcast on the most networks ever — this year won’t be any different, though a greater abundance of livestreams should impact linear numbers, making 2016 murkier than previous campaigns.

In 2012, the first round reached 67.2 million overall audience members, which was actually the most registered by Nielsen since Oct. 15, 1992 (69.9 million), when George H.W. Bush, Bill Clinton and Ross Perot traded barbs and plans for America. That triple threat match back in ’92 ended up being the second most-watched presidential debate of all time.

So what’s the record? And can Trump-Clinton take it down?

On Oct. 28, 1980, in their only televised bout of the year, Jimmy  and Ronald Reagan set a still-standing presidential debate record with 80.6 million total viewers. Yes, really. Based on how much TV viewing has changed, that record’s unlikely to ever fall — even with the unusual anticipation building for Trump vs. Clinton.

Of course, Nielsen didn’t measure total viewers back in 1960 for Nixon-Kennedy, so we can’t properly speak to that debate’s final tally. Their four face-offs drew far fewer households than -Reagan, however, as the television set was less popular and America less populated, so we can safely assume it wouldn’t upset the top slot.

Check out the chart below, in which TheWrap ranks every available televised presidential debate by total viewers. 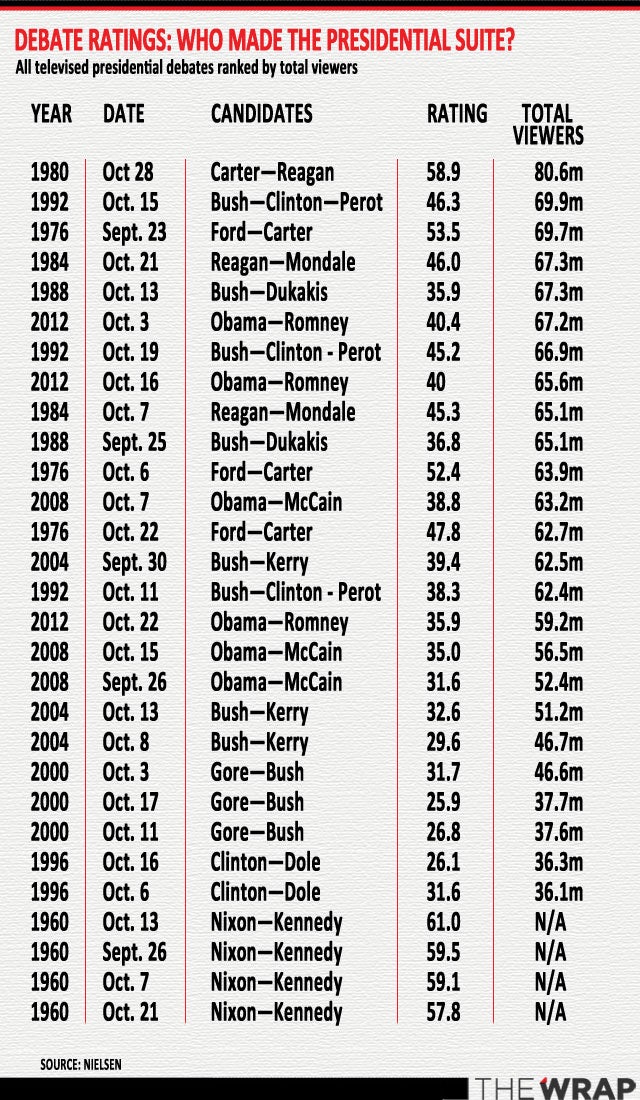