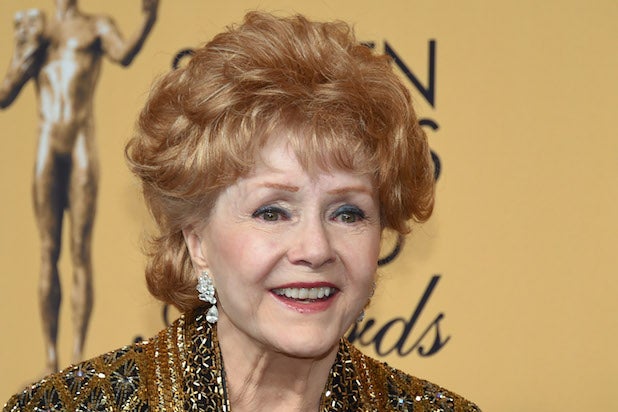 Debbie Reynolds was more than just a movie star. According to William Shatner, she was “one of the last of Hollywood royalty.”

Reynolds died at age 84 on Wednesday, just one day after the death of her daughter, “Star Wars” heroine Carrie Fisher. Just as they had 24 hours earlier for Fisher, celebrity tributes began flowing on Twitter — this time for the star of “Singin’ in the Rain.”

“Debbie Reynolds was one of the last of Hollywood royalty,” Shatner wrote. “It breaks my heart that she is gone. I’d hoped that my grieving was done for 2016.”

Also Read: Debbie Reynolds' Greatest Roles, From 'Singin' in the Rain' to 'Will & Grace' (Photos)

“She was one of the last of the true H’wood talents: actress, singer, dancer,” wrote “Family Guy” creator Seth MacFarlane.

Albert Brooks, who cast Reynolds in the title role of his bittersweet comedy “Mother,” was among those stunned by the timing of Reynolds’ passing: “I can’t believe this happened one day after Carrie.”

A sampling of the Hollywood reaction to Reynolds’ death:

Debbie Reynolds was one of the last of Hollywood Royalty. It breaks my heart that she is gone. I’d hoped that my grieving was done for 2016.

Debbie Reynolds, a legend and my movie mom. I can’t believe this happened one day after Carrie. My heart goes out to Billie.

Deepest condolences to the family of Debbie Reynolds. I was just notified of her passing. Such a talented charming lady & a good mother -B pic.twitter.com/83hIROaXSc

My favorite Debbie Reynolds recording. She was one of the last of the true H’wood talents: actress, singer, dancer: https://t.co/67zWUUHDhv

Debbie Reynolds helped light my passion for performing with Singin’ in The Rain. She will always be an icon. Rest with Carrie, Debbie.

To lose your child,is a grief maybe too much to bear #RIP Debbie Reynolds.

I can’t imagine what Carrie Fisher and Debbie Reynolds‘ family are going through this week. I send all of my love.

Debbie went to be with Carrie. She always worried about her. Carrie left too soon and now they are together again. My heart is literally broken. For 8 years she was my mom. She was pure energy & light when she came on stage. She was loving, and bawdy, and playful- a consummate pro- old school and yet had the work ethic and investment in her craft of a new fiery up and comer. She was always running off to Vegas or somewhere else "on the road" to be a hoofer, to sing and dance and make people laugh. She performed 340 days out of the year. An inspiration on every level. A Legend of course, the epitome of clean cut American optimism, dancing with Gene Kelly as an equal, a warrior woman who never stopped working. A devoted mother and grandmother, and aunt and great aunt, and friend. I lost my mom a few years ago. She loved that Debbie was my TV mom. I hope they find each other and hug and kiss and my mom says, "I got you, Debbie. Carrie's waiting for you." RIP Bobbie Adler. ❤

There are so many things Carrie would have to say about this. But I am sure they are holding each other right now. Sail on silver girls. ???? pic.twitter.com/YlrN6prvM8

Some of the magic people have left the tribe…for the moment I am inconsolable…????????????

It is beyond astonishing that both @carrieffisher & @DebbieReynolds1 have left this earth. I overwhelmingly adored & admired them both. ???????????? pic.twitter.com/emLn1ZvwUd

The combination of the loss of @carrieffisher & then her mom @DebbieReynolds1 is too much. I'm really at a loss here… #toomuch16