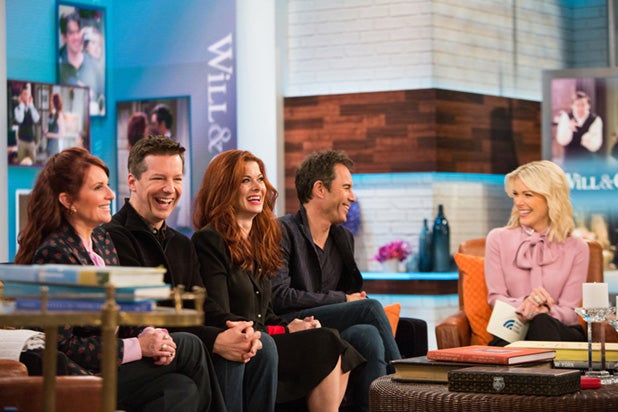 Debra Messing responded to criticism over her appearance on the Monday premiere of “Megyn Kelly Today,” saying she regrets going on the show because of some of host’s comments about a “Will & Grace” super-fan in the audience.

“Honestly I didn’t know it was [Megyn Kelly] until that morning,” Messing wrote in response to a commenter on her Instagram page. “The itinerary just said Today Show appearance. Regret going on. Dismayed by her comments.”

At issue was a moment when the former Fox News star jokingly asked a “Will & Grace” fan named Russell Turner if he “became” gay because of the show. “Is it true that you became a lawyer, and you became gay, because of Will?” she asked.

Turner responded, “I look at Will Truman, I’m like, ‘He has it made': lawyer, best apartment in New York City, and gay? Come on, trifecta.”

But one of Messing’s Instagram fans called the segment on the Kelly’s daytime show debut a “fail,” prompting the actress’ explanation for the appearance — where she was joined by the show’s co-stars Sean Hayes, Megan Mullally and Eric McCormack.

Kelly closed the segment by giving Turner tickets to attend a live taping of the newly rebooted sitcom in Los Angeles. “I don’t know about the lawyer thing, but I think that ‘Will & Grace’ thing and the gay thing is going to work out great,” she said.

“She was obviously making a joke, that was clear to the “superfan” – who was ecstatic, and the audience,” an individual who was at the taping told TheWrap. “It became even clearer when she spent much of the interview asking the show’s creators how proud they were of the positive social impact of Will & Grace and the progress it brought about for gay rights.”

However, the comments earned some criticism from social media users and critics, who called the comments “cringeworthy.”

Shortly after the appearance, Hayes tweeted a photo from the set with the caption “Having fun on the premiere episode of @megyntoday,” which Messing later retweeted.

Reps for Messing did not immediately respond to TheWrap’s request for comment.

The cast and co-creators David Kohan and Max Mutchnick made the appearance on the show to promote NBC’s upcoming revival of “Will & Grace.” The discussion also touched on the show’s cultural impact over the years, including former vice president Joe Biden’s comments citing the show’s influence in his endorsement of marriage equality.