The first episode of Freeform’s docuseries “The Deep End,” which premieres May 18, takes a look at spiritual adviser Teal Swan: Is she saving lives or running a cult?

“If you want to come within 50 miles of me, you better be ready for the deepest end of the pool,” she tells followers in the trailer, which Freeform released on Wednesday. She also tells the filmmakers that she aims to be “more spiritually influential than the Pope.”

While acolytes sing her praises, with one declaring, “I think she’s Jesus,” one ex-follower admits, ”I was so [brain]washed, I’d be willing to kill someone and bury them in the backyard.” 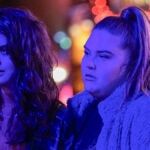 As the clip begins, she tells her group they’re going to be ”channeling”: “It’s an incredibly dangerous process. It’s also one of the most powerful tools that has ever existed,” she says.

“The Deep End” was filmed over three years with unprecedented access, and is described as “an unflinching portrayal of an unregulated wellness industry, and the incredible lengths people will go to in their search for connection.”

The four-part docuseries is directed by Jon Kasbe, produced by Bits Sola, and executive produced by The Documentary Group’s Tom Yellin and  Gabrielle Tenenbaum.

It debuts Wednesday, May 18 at 10 p.m. on Freeform and will stream on Hulu the next day.