The official trailer for the new psychological thriller “Deep Water” has arrived, in which Ben Affleck and Ana de Armas play a married couple with some serious troubles.

The 20th Century Studios film is based on the novel of the same name by Patricia Highsmith and hails from “Indecent Proposal,” “Fatal Attraction” and “9 1/2 Weeks” director Adrian Lyne. Affleck plays Vic, a husband who is becoming increasingly perturbed by his wife’s open philandering, while de Armas plays Vic’s flirtatious and cunning wife Melinda. Things take a bloody turn at a party when a body turns up in the pool.

The film boasts a screenplay by Zach Helm (“Stranger Than Fiction”) and “Euphoria” creator Sam Levinson. 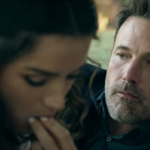 “Deep Water” was a bit in limbo after Disney acquired 20th Century Fox, as the film was shot back in 2019 and its seriously R-rated nature is not exactly befitting a streaming service like Disney+. While initially slated to hit theaters in 2020 and then 2021, Disney opted to skip a theatrical route altogether — it will now be released exclusively on Hulu on March 18, 2022.

Watch the tense new “Deep Water” trailer in the player above.