For Delia Ephron, the screenwriter, essayist and novelist behind films like “You’ve Got Mail” and books like “The Lion Is In,” writing is a form of therapy.

That’s not a surprise, given that her parents were screenwriters Phoebe and Henry Ephron (“Desk Set”) and her sister was none other than the late, great Nora Ephron, who routinely cooked up romantic comedy confections like “When Harry Met Sally” and “Sleepless in Seattle.”

So when her sister died in 2012 at the age of 71 from cancer, and the world mourned her talent, Delia Ephron retreated from the flood of encomiums and obituaries to make sense of her death through the craft to which they both devoted themselves.

The process was different. The public mourned the loss of a distinctive comic voice, but she was coping with the death of her sister, her surrogate mother and her frequent collaborator.

Also read: Nora Ephron: From ‘When Harry Met Sally’ to ‘Julie & Julia,’ She Made It OK to Eat

The result of this exploration is “Sister Mother Husband Dog (etc.),” a witty and honest collection of 15 essays that tackles the subject of her sister’s death head on — dissecting their occasional rivalry and deep love, as well as the bizarre process of public grief.

But it doesn’t stop there; Ephron also dives into her difficult childhood growing up with an alcoholic mother, the problems of technological changes (why are you constantly being prompted to update software with diminishing results, for instance?) and the joys of having a canine companion. The book came out at the end of September.

TheWrap spoke with Ephron about her inspiration for the collection, why “dog people” are a step up the evolutionary ladder and moving on after Nora’s death.

What inspired this collection of essays?

After Nora died, I was so lost and confused and shell-shocked. I would go into my office in the afternoons and writing was a way to be together. It got me through things at a time when the world was dizzy. Everything was just askew and it got me to a better, slightly saner place to write about us.

I imagine it must be difficult to see a loved one mourned publicly when you knew them on a personal level. What was that experience like for you?

The only word for it is strange. I bumped into someone shortly after Nora died — someone I’d never met — who said, “I dream about your sister every night.” It was like she was owned by strangers and that was hard for me. That’s why I write that I understand what it must be like to be Caroline Kennedy — as if we had anything in common — but she has to go through life with people telling her how much the president meant to them when she lost her daddy.

Of course, it was so wonderful that Nora had that ability to connect with people, and I think people really admired the way she lived her life. They knew she was brave and that she always kept going. 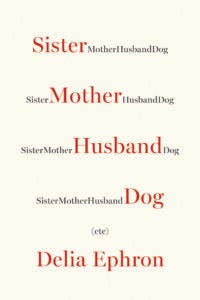 People didn’t know she was sick, which you write was how she wanted it. The public seemed to react so strongly in part because it was shocked. What were you feeling?

I was so angry that she had died and I missed her so much. I know you’re not supposed to be angry when something like that happens, but it makes you angry because you have no control over it. My feelings were in many ways more complicated and complex and deeper than the love that was poring out from the public.

It was a sudden death for them, because she had looked so healthy. I mean she always looked so perfect, and then the next day she was gone. I think they were gobsmacked. I, on the other hand, knew she had been sick.

What was the best writing advice Nora ever gave you?

Always know what you think.

You write very movingly about your mother and how her alcoholism impacted your childhood. Is this the first time you’ve opened up about that?

In a way. My work is filled with people who are alcoholics or recovering, and I’m not either, but I’ve been surrounded by it.

It was also that thing that my mother said on her death bed, “take notes.” It got repeated in all the coverage of Nora’s death and it was a line that always bugged me, because that was not the message I got from her.

Growing up I was told, “never tell anyone what happens here.” So I didn’t appreciate this romanticized vision of my mother. My mother wore one liners like armor, and I wanted take that on, because I felt it was not my story.

My parents were emotionally distant and humor was just another way for them to be there. They let cleverness pass for wisdom.

Is it hard to get the kind of movies you specialize in made today? Hollywood doesn’t seem to be making many romantic comedies.

It’s harder to make almost anything these days that doesn’t involve the end of the world and is about women. That said I do have two original screenplays that look like they are going to be made, one of them is going to be directed by Ben Lewin, who directed “The Sessions,” and the other one is about a woman who talks to animals and who falls in love with a man that talks to the dead.

You clearly love your dog. She is the subject of a stand alone essay and is even in your author photo. Why do you think people have such a connection to dogs?

They’re magic. They just are. They just complete life. You come home and there they are. They’re so much fun and so pure.