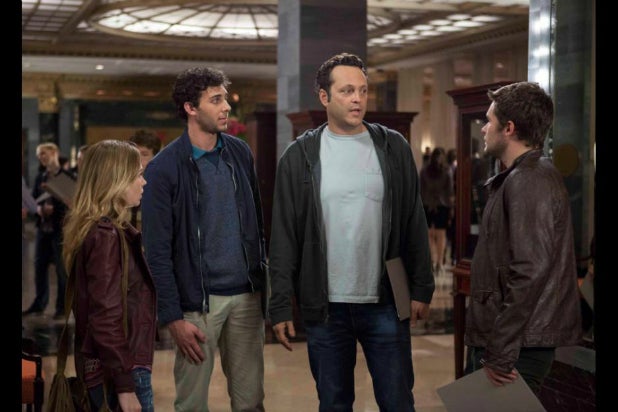 Whatever happened to Vince Vaughn? He hasn’t been physically absent from the movies by any means, but the fast-talking hustler of “Swingers” has become, over the years, a lazy and uninspired leading man, emptily vamping his way through forgettable vehicles like “The Watch” and “The Internship” and “The Dilemma” and “Four Christmases” and “Fred Claus,” to name just a few.

A remake of the Canadian comedy “Starbuck” (released in the U.S. earlier this year), “Delivery Man” offers comedy and sentimentality in equal doses and, unfortunately, equal efficacy — the jokes, the characters and the situations aren’t very funny, and the would-be heart-tuggery is mostly embarrassing.

Vaughn stars as David Wozniak, a ne’er-do-well manchild who’s unreliable and constantly in trouble; he’s currently deeply in debt to some thugs because of a bad investment, and his wages as a delivery-truck driver for his father’s butcher shop isn’t helping him make ends meet. David’s cop girlfriend Emma (Cobie Smulders) announces she’s pregnant but that she doesn’t want David involved until he can get his act together.

Soon thereafter, David learns that Emma isn’t the first woman to carry his child; back in the 1990s, he earned money as a frequent sperm donor, and it turns out that he has biologically fathered nearly 600 children, more than 100 of whom are suing the fertility clinic to learn David’s identity. David’s best pal, less-than-competent lawyer Brett (Chris Pratt), urges David to keep his paternity secret — he used the code name “Starbuck” when making donations — but when David gets his hands on letters from his children, he can’t resist the urge to start snooping.

Before long, David is peeking in on the lives of several of his kids, taking over a son’s barista shift so he can make an audition, watching to make sure a daughter doesn’t backslide into heroin addiction, cheering various offspring on at their jobs as lifeguards and historical reenactors. Doing good deeds for these young adults, he thinks, will prove to Emma that he’s got the right stuff for fatherhood.

This synopsis probably makes “Delivery Man” sound more fun than it is — the movie lacks wit and energy, and its attempts to be quippy fall flat, defying the comic talents of Pratt and Smulders and Bobby Moynihan (who plays one of David’s more settled brothers).

The film’s portrayal of David’s involvement with his spawn starts out creepy — there’s something weirdly stalker-ish about the way he suddenly insinuates himself into the lives of these people who don’t know who he is — before becoming insulting and offensive. David discovers that he has an institutionalized son who uses a wheelchair and is unable to communicate. “Delivery Man” gleefully turns this character into a trophy for David’s decency, hoping to score points by dragging him out as a magical prop, and it’s utterly condescending.

Writer-director Ken Scott, who also made the original film, writes himself in circles to keep the whole plot deception going, to the point where it seems David’s only reason to remain anonymous is that, now that news of the lawsuit has hit the media, there’s public ridicule of “Starbuck” as a chronic masturbator. And the whole owing-money-to-mobsters subplot, which only rarely even comes up, gets settled so lickety-split you might miss the resolution during a popcorn run.

Corn is all you’re getting from “Delivery Man,” unfortunately, and it’s a particularly stale batch.