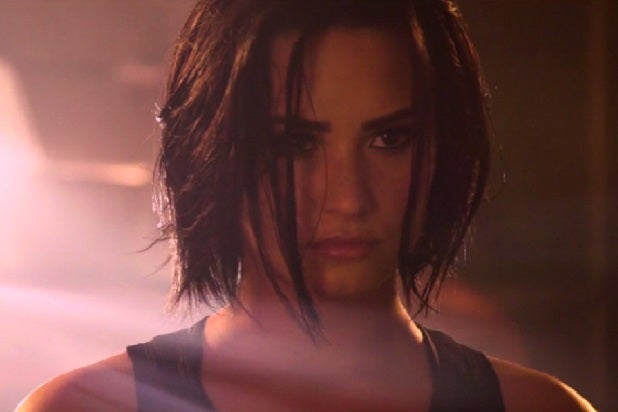 Demi Lovato is feeling all kinds of “Confident” these days.

The former “Sonny With a Chance” star, who made massive waves on the internet Friday with a nude, makeup-free photo shoot for Vanity Fair, followed up on Saturday with another revealing glimpse — this time of her upcoming video “Confident.”

The video is directed by Robert Rodriguez, who said last month that he agreed to helm the clip after Lovato appeared on his television show “From Dusk Till Dawn.”

“I was so impressed by Demi’s fearless performance as a guest star on my TV series From Dusk Till Dawn that I jumped at the chance to direct her video,” Rodriguez noted. ” “I basically treated this like we were shooting a high-octane action film, because she has the presence and star power to pull it off. She’s incredible.”

Actress Michelle Rodriguez will also appear in the video.

In a video accompanying her Vanity Fair photo-shoot, Lovato, who’s suffered from eating disorders, said that she decided to pose nude and makeup-free to display her confidence.

“When I think of confident, I think of many things, but one thing in particular is feeling comfortable in your own skin,” Lovato revealed. “And I thought there was something incredible about the idea of no makeup whatsoever, no clothes and no retouching.”