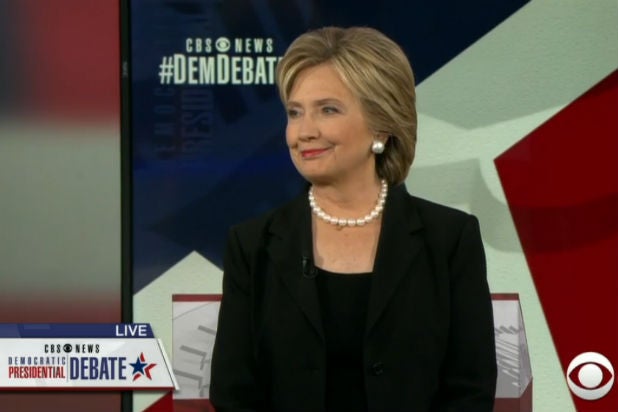 All three hopefuls for the Democratic presidential nomination weighed in on the harrowing terrorist attacks in Paris during a live debate on Saturday in Des Moines, Iowa.

Former Secretary of State Hillary Clinton, Vermont Sen. Bernie Sanders and former Maryland Gov. Martin O’Malley were each given a moment to speak about the coordinated attacks that killed nearly 130 people Friday in the City of Light.

Just before the candidates addressed Islamic extremists, moderator and “Face the Nation” host John Dickerson called for a moment of silence across the auditorium at Drake University.

Clinton began by offered her prayers, but conceded “that is not enough. We need to have a resolve that will bring the world together to root out the kind of radical jihadist ideology that motivates organizations like ISIS.”

The former Secretary of State said “this election is not only about electing a president, it’s about choosing our next commander-in-chief. I will be laying out in detail what we need to do with our friends and allies … to do a better job of coordinating efforts against the scourge of terrorism.”

Sanders didn’t spend as much time on the topic at first, saying he concurs “with all Americans who are shocked and disgusted by what we saw in Paris yesterday. Together, leading the world this country will rid our planet of this marvelous organization called ISIS.”

The remainder of his opening statement was used to express his motivation for office: “I’m running for president because as I go around this nation I talk to a lot of people. And what I hear is people concerned that the economy we have is a rigged economy.”

O’Malley took a more dramatic turn and called the shootings and explosions throughout Paris “the new face of conflict and warfare — there is no nation on the planet better than our nation to adapt to this change. We must anticipate these changes before they happen.”

The former governor of Maryland added, “This is the new sort of challenge, the new sort of threat that does, in fact, require new thinking, fresh approaches and new leadership.”

Homeland security, foreign policy and the current administration’s handling of ISIS will likely be major themes on both sides of the ticket as candidates race for party nominations ahead of 2016.