Political donor and activist Ed Buck was convicted Tuesday on all charges stemming from the death of two men in separate instances at his West Hollywood apartment.

The jury found Buck guilty on the first day of deliberations in the case in which Buck was charged with nine felony counts including two counts of distribution of methamphetamine that resulted in the deaths of Gemmel Moore in July 2017 and Timothy Dean in January 2019, both at the apartment.

Buck was also charged with knowingly enticing Moore to travel to Los Angeles to engage in prostitution.

Buck, who has reportedly donated more than $500,000 to Democratic politicians and causes, was found guilty on all counts.

Each of the charges for distribution of drugs resulting in death carries a mandatory minimum sentence of 20 years in federal prison, and the maximum sentence is life in prison without the possibility of parole, according to the Department of Justice. 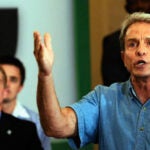 Prosecutors said that Buck, 66, would pay men, often homeless and frequently Black men, to come to his apartment and use drugs and engage in sexual acts, often tied to his fetish for injecting them with methamphetamine, according to news reports. Assistant U.S. attorney Chelsea Norell reportedly told the jury last week that the men entered “the gates of hell” when they went into his Buck’s apartment for his so-called “party and play” drug and sex sessions.

Buck was arrested in September 2019 and his trial on federal charges related to drugs and the men’s deaths began earlier this month.

“We thank Los Angeles County District Attorney Jackie Lacey and her team of investigators for conducting a thorough investigation in the tragic deaths of Gemmel Moore and Timothy Dean. We know that the judicious approach to the investigation took some time, but we hope that the District Attorney’s action will lead to more than just his arrest last night. For Mr. Moore’s and Mr. Dean’s families, we hope his arrest is the first step toward justice for their families,” Mark J. González, the president of the LA County Democratic Party, said Wednesday.

“For our community, a predator with a Jekyll and Hyde personality is now off the streets. And it is due to the ongoing support and pressure from many activists and community groups including Black Lives Matter, Jasmyne Cannick and more.”