The defiance of social mores and expectations can be the stuff of great drama, and watching Jake Gyllenhaal register almost no feeling about the sudden death of his wife gives “Demolition,” for most of its running time, an exciting level of unpredictability. Here’s a man who is so clearly not behaving in the expected manner that we have absolutely no idea what he’ll do next.

Gyllenhaal stars as Davis, a rapacious young Wall Street whiz kid who seemingly has everything, up to and including his beautiful wife Julia (Heather Lind, “Turn”), who just happens to be the daughter of Davis’ boss Phil (Chris Cooper). But after Julia dies in a car accident — and seriously, filmmakers, the whole “point of impact shot from inside the vehicle” thing has crossed the line into cliché — Davis never appears to register any sadness. Or any other emotion, for that matter.

At first, he channels whatever feelings he might have into a series of letters to a vending machine company, since the snack machine in the intensive care unit where Julia died failed to deliver Davis the M&M’s he paid for. Over the course of those missives, Davis pours out the minutiae of his life and of his feelings, or lack thereof, for Julia. (Those letters provide some of the screen’s funniest correspondence narration since the recurring “Dear Ndugu” notes from Jack Nicholson in “About Schmidt.”)

Before that truck barreled into them, his wife’s last request to him was to fix the drip in the refrigerator, which he does — by taking the whole thing apart and then leaving it in pieces on the floor. Davis finds a sense of satisfaction by dismantling other objects in need of repair, and soon his work computer and a squeaky-doored bathroom stall fall victim to his screwdriver before Davis moves on to larger targets.

The wonderfully awkward comedy of “Demolition” stems out of both Davis’ inappropriate behavior and the unwillingness of those around him to push him too far on the subject; the script by Bryan Sipe (“The Choice”) underscores how inclined Americans are to treat the bereaved with kid gloves, as though they were all time bombs waiting to go off. The deadpan and sometimes excruciating discomfort on display, played for laughs, calls to mind the early, emotionally subversive films of David O. Russell, and not just because “I Heart Huckabee’s” co-star Naomi Watts turns up as Karen, a mystery woman with an interest in Davis. 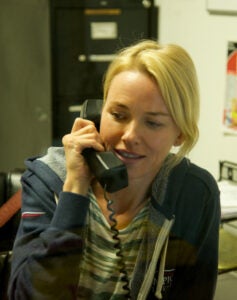 Her eventual friendship with him doesn’t travel down predictable paths, nor does Davis’ bonding with Karen’s genderqueer son Chris (Judah Lewis, “Point Break”). Unfortunately, Sipe and director Jean-Marc Vallée (“Wild,” “Dallas Buyers Club”) can’t stop themselves from skidding into sap by the time the finale rolls around, but these miscalculations come so late in the film that they don’t entirely unravel it.

Gyllenhaal once again comes out to play, gamely taking on a character who isn’t always likable or even scrutable. Still, it’s a delight to see his transformation; in the beginning sequences, he’s like a cross between the protagonists of “American Psycho” and “Being There,” but by the end he’s dancing down the streets of Manhattan to one of Chris’ mix tapes with dorky exuberance. Playing both the wit and the sadness with grace, Watts empathetically captures this harried single mom, and there’s none of that artificial fussiness that can emerge when one of the screen’s great beauties tries to pass herself off as just plain folks.

Even though his character is somewhat betrayed by the script and stripped of some dimensionality, Cooper takes what could have been a standard-issue rich bastard and imbues the character with warmth and depth; he does lose his daughter, after all, and both he and Polly Draper, as his wife. balance that singular pain with their increasing frustration over Davis’ behavior. For his part, Lewis steals scenes with what could have been a stock character; Chris’ ongoing conversations with Davis about the correct, judicious use of the f-word are a solid running gag.

Cinematographer Yves Bélanger (“Brooklyn”) and the production design team balance sterile modernity of Davis’ world — his glass-box house could easily be an extension of his office – and the lived-in clutter of Karen and Chris. The film’s memorable, cathartic closing shot is no doubt a bit of digital trickery, but it plays organically.

“Demolition” strikes a tricky balance; it’s a comedy of manners that never judges its hero’s bizarre behavior. Had it stuck to its emotional guns, it would stand much taller, but even its ultimate flaws can’t erode its sturdy foundation.