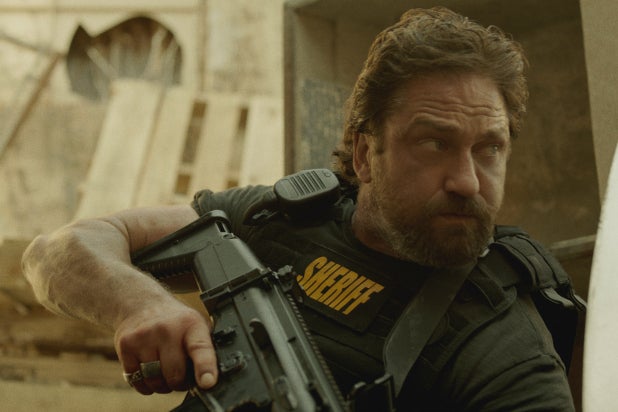 With its loose-cannon cops, ice-cold crooks and urban Los Angeles sprawl, “Den of Thieves” wants to be “Heat” very, very badly — and it comes a lot closer than you expect.

Director Christian Gudegast lacks the operatic, mid-’90s freedom than Michael Mann had, not to mention Mann’s peerless technique and moral complexity, but for a movie so conspicuously wearing its chief influence on its sleeve, the first-timer employs an appealing, restless energy that gives his homage its own life on screen. Meanwhile, Pablo Schreiber and O’Shea Jackson Jr. quietly command the screen opposite a suitably bloated, snarling Gerard Butler in a cat-and-mouse game that unfolds at an unwieldy length (140 minutes) but not without plenty of sublime, thrilling highlights.

Butler plays “Big Nick” O’Brien, a corrupt LAPD officer who heads the Regulators, an elite group of county sheriffs who evidently pursue criminals as though their training manual was, well, from 1980s and ’90s cop movies: after discovering a connection between a bartender named Donnie (Jackson, “Ingrid Goes West”) and Ray Merrimen (Schreiber, “American Gods”), the chief suspect in an armored-car heist, O’Brien’s men kidnap Donnie and beat him until he agrees to be an informant for them.

Also Read: Inside the 14-Year Road to Gerard Butler's 'Den of Thieves'

Merrimen, an ex-soldier who stages elaborate heists with his partner Levi Enson (Curtis “50 Cent” Jackson), has his sights set on the Federal Reserve Bank in downtown Los Angeles, and needs Donnie as a getaway driver. Donnie soon finds himself in the middle of an extraordinarily difficult situation when both O’Brien and Merrimen uncover Donnie’s relationship with the other, and try to use him to set their respective plans in motion.

One of the many reasons that “Heat” works so well is because it clearly defines the code by which each of its two protagonists operates, and then builds the story, and the action, outward from there. Gudegast, making his feature directing debut after writing “A Man Apart” and “London Has Fallen,” seems to understand just enough about that element of Mann’s film to recreate some of its conflicts — both in terms of crime scenarios and the characters’ civilian lives — but lacks the discipline, or maybe skill, to lend them real emotional weight, much less originality.

It almost seems as if every character in this movie is impersonating someone from Mann’s: You could easily imagine Merrimen watching “Heat” and trying to emulate Robert De Niro’s unflappable professionalism, while O’Brien feels like a guy who would love to style himself after the bombastic Al Pacino but can only pull off the noisy scenery-chewing and trainwreck personal-life stuff. Jackson, Jr.’s Donnie comes from another ’90s crime movie, but to reveal its title would likely spoil many of the film’s third-act surprises.

Otherwise, the film mostly fails to do more than run down a checklist of familiar crime-story tropes, up to and including a protracted speech about a place that’s virtually impenetrable that ends with “…and that’s why we’re going to rob it.” But even if the final heist is almost exciting enough to warrant the overlong wait to get to it, Gudegast’s staging is more interested in action than in storytelling; as exhilarating as Mann’s downtown showdown is, it’s leavened with real dramatic stakes and driven by clearly-defined motives, whereas “Den of Thieves” culminates in a shootout-chase that is being performed largely out of obligation — as in, fealty to the gods of squibs and deafening sound effects.

There’s something additionally irresponsible about the fact that the cops initiate the standoff knowing that there are dozens of motorists in the line of fire, and seem fully indifferent to their harm as they exchange thousands of rounds of ammunition to apprehend five guys who took a bunch of money that no one will miss.

Since making his debut playing his father Ice Cube in “Straight Outta Compton,” Jackson, Jr. has quickly proven he’s capable of the same sly versatility as O’Shea Jackson Sr., and makes a skillful career move here playing the gazelle caught between two lions. As Merrimen, Schreiber exudes the reliability and toughness of actors like Frank Grillo and Jon Bernthal, but gives the character a poise, a sense of calm, that makes him quite frankly the kind of guy that O’Brien would become obsessed with catching.

Butler, lurching and ferocious, unfortunately isn’t quite equal to the task of playing O’Brien with the same sleight of hand as his co-stars; he gives the wrong kind of wild-card performance in a role that demands more vulnerability than he’s capable of giving (or willing to give), turning the character into a parody rather than portrait of a driven cop.

But even if it lacks Mann’s poetry, Gudegast’s take on “Heat” is still better than it has any right to be; even when they miss the mark, the actors are clearly enjoying being a part of his machine. This is the kind of film where the actors are given few lines of dialogue and lots to do — gunfights notwithstanding, they assemble doodads, get to use blowtorches and impersonate DWP employees — and everybody seems game to give themselves over to the filmmaker’s vision, derivative though it may be. Indeed, that energy from the cast is infectious enough to carry over to audiences, who haven’t seen a movie like this in a while, or at least one not so self-serious about aping an absolute classic.

Ultimately, “Den of Thieves” falls short of its goal, but it gets points for aiming high; there are worse things than trying to be the next Michael Mann when few others would dare try, especially if they lack the enthusiasm oozing out of every frame of your imitation.

As Hollywood stars, media gurus and social elites descended on Miami to circle the art scene, TheWrap highlights the best from the colorful week

What happens when Hollywood's hottest club hosts a party at Miami's wildest late-night spot? Bootsy Bellows and Blind Dragon joined forces with E11EVEN Miami on Friday to host the party of the weekend with Lil Wayne and Drake hugging it out on stage. The h.wood Group’s Bootsy Bellows pop up sold out the South Beach super club, where guests popped Perrier Jouet and  Absolut Elyx until the early hours.