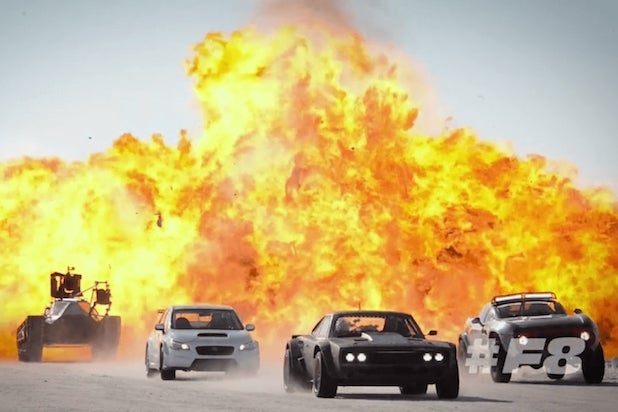 WARNING: Minor action scene spoilers for “The Fate of the Furious” are ahead.

When you climb into theaters to enjoy “The Fate of the Furious,” the latest installment in everyone’s favorite live-action cartoon for grownups, just be prepared for this: Yes, that’s a real Lamborghini. Yes, that is a real Bentley. Yes, they are worth untold amounts of money. And yes, they — along with dozens upon dozens of other cars — are getting smashed to bits before your very eyes.

When it comes to certain shots of cars flying through the air, absolutely no computer-generated imagery was used. Those are the real cars in action, captured on camera, according to Dennis McCarthy, the man responsible for preparing the jump cars, and also that Lambo and Bent for total destruction. And yes, he cringes when he witnesses his cars getting wrecked.

“I love cars. It’s my passion. It’s the biggest part of my life,” McCarthy told TheWrap. “So to see the Lamborghini getting damaged is painful to watch, and it’s even more painful seeing cars that we’ve labored over and put hundreds of hours of work into get wrecked in a matter of minutes.”

Alas, that is just part of the business, and for Dennis McCarthy and his team at Vehicle Effects in the San Fernando Valley, business is booming.

For 13 years, McCarthy has been in charge of selecting and building cars for some of Hollywood’s biggest films. Did your jaw drop when you saw the Batmobile used in “Batman v Superman”? McCarthy helped design that. The redesigned Ecto 1 used in last year’s “Ghostbusters” reboot? McCarthy was behind that, too. And that now-legendary opening dance sequence on the freeway in “La La Land”? It was McCarthy’s job to set up the cars in a parking lot for rehearsal and then get them in place in the exact same order on the 105/110 overpass in Los Angeles so Justin Hurwitz and his team could film sprightly dancers cavorting around and on top of the traffic jam.

But through it all, the “Fast & Furious” films have been McCarthy’s biggest claim to fame, serving as car coordinator for the franchise starting with its third film, “Tokyo Drift,” in 2006. McCarthy got his start in the movie business servicing cars and trucks for Hollywood studios in 2002 while running his own automotive shop in Burbank. His relationship with “F&F” began with a job fixing up cars used in “2 Fast 2 Furious” to be used for promotional tours. Shortly after, he was approached by Universal and asked what he knew about drifting.

Soon, McCarthy was off to Japan to meet with pro drifters and do research for the movie, and when he returned, it became his job to design the colorful Skylines, Lancers, and RX-7s used in Justin Lin’s film. Since then, McCarthy has returned to the franchise for every film as it transformed from a street racing series to a globetrotting box office behemoth.

When it comes time to make a new “F&F” movie, he gets a call from the film’s producers and looks at the script written by the franchise’s longtime screenwriter, Chris Morgan. From there, it’s up to McCarthy and Vehicle Effects to figure out what the best car for each scene would look like and how to make it a reality.

Sometimes, the car selection is based purely on the personality of the character driving it. Such is the case for the franchise’s leading man, Dominic Toretto, who is often seen behind the wheel of a muscle car. Dom’s classic muscle cars are often built from scratch by McCarthy’s team, with a modern engine under the hood.

The modern Challengers and Chargers, on the other hand, tend to be supplied directly from Dodge and then modified to suit the needs of the filmmakers. Other manufacturers, such as Mercedes-AMG and Jaguar, have also supplied cars for the series.

But as the films have added increasingly elaborate stunts, McCarthy has been faced with the challenge of finding and building suitable cars for, say, surviving big jumps, throwing out of the back of a plane or, in the case of “Fate of the Furious,” driving across ice while being chased by military vehicles. In the case of the latter, the Lamborghini Murcielago was selected not only because it looked good, but because it was better designed to drive across ice than a Ferrari or a McLaren. And when it comes to iconic supercars, McCarthy always wants to buy them rather than try to replicate them from scratch.

“That was a 2006/2007 Murcielago, and we bought three of them,” McCarthy said. “That’s one of those cars you never want to fake. It’s also an all-wheel drive car. There are a lot of exotic cars out there, but because a Lamborghini can spin all four tires on the ice, it was an easy decision to make. A two-wheel drive car is almost impossible to drive on the ice and wouldn’t be able to keep up with the other cars in the scene at such a high speed.”

Also Read: 'Fate of the Furious' Speeds to $10.4 Million at Thursday Box Office

What “F&F” fans may also not know is that in any given scene, what appears to be the same car speeding down a road is actually multiple cars being swapped in and out of each shot. McCarthy has always made sure he has at least one backup for each car in a scene, but ever since “Fast Five” started raising the bar on the car stunts, Vehicle Effects has provided as many as ten cars for a scene. And yes, when the script demands it, one of those cars is designed to be turned into a pile of scrap metal.

“The good thing is that the car that gets wrecked is usually a car we intended to get wrecked. It eases the pain quite a bit.” McCarthy said.

As an example of how much work can go into a single car in a scene, McCarthy described the work that went into the Ice Charger driven by Toretto in the third act of “Fate of the Furious.” In addition to the version with detailed interiors that would be used by Vin Diesel, three stunt cars were built for shooting the scenes driving across the ice, one with a detailed exterior for regular shots, a second with tuned-up suspension and a tougher body for crashing against the other vehicles, and a third that was just a shell car that could be used for flying through the air and would look good getting beat up.

Also Read: 30 'Fast and Furious' Franchise Facts You Might Not Know (Photos)

“We also made a couple of jump cars for the scene where Dom goes flying out of the warehouse,” McCarthy said. “Those required a lot of work on the suspension and a lot of tuning up to make sure that it would be just right for the stunt drivers. There’s no CG there.”

But the toughest job of all was the grand finale where Cipher, Charlize Theron’s villain, hacks into all the cars in New York and sends them self-driving after Toretto’s team. Much of that segment was shot with the second unit in Cleveland, while Diesel and the rest of the cast filmed with the first unit in Atlanta. The logistics of filming the scene became quite difficult when planning around the massive pileup at the end of the film.

“We had about 40 or 50 cars in that pileup,” McCarthy said. “So first we had to smash up those cars in Cleveland, and then we sent them all over to Atlanta and had to recreate that entire pileup the way it was when second unit filmed it.”

Also Read: Vin Diesel Tears Up Over 'Fate of the Furious' Without Paul Walker: 'We Never Want to Let Him Down'

Now that “Fate of the Furious” is done, McCarthy is currently working on cars for Marvel movies like “Black Panther” and “Avengers: Infinity War.” But he knows it won’t be long before he gets the phone call telling him it’s time to work on film No. 9 in the “Fast and Furious” franchise, and he admits he sometimes gets worried that he might be asked to provide cars for stunts so outlandish he might not be able to pull it off.

“I was worried about that going into this one,” he admitted. “After ‘Furious 7’ I thought, ‘Man, how are we going to top this one?’ That’s always my number one concern, but once we see what Chris has put down on the script it kinda comes together, like how we knew right away that we were going to use an all-wheel drive to drive across the ice.”

“If you were to ask me right now what we’re going to do for film nine I wouldn’t know what to tell you, but we’ll get some pages at some point and I’m sure we’ll come up with something.”

83 of the 'Fast and Furious' #Family's Cars through 'Fate' Ranked, Worst to Best (Photos)

Dom and co. have driven a lot of cars

So, over the course of eight movies, the "Fast and Furious" family has driven a whole lot of cars.  This list isn't quite exhaustive -- but it is 83 of the most prominent of the family cars we've seen them vroom vroom around in. Read on to live your life one quarter mile at a time.