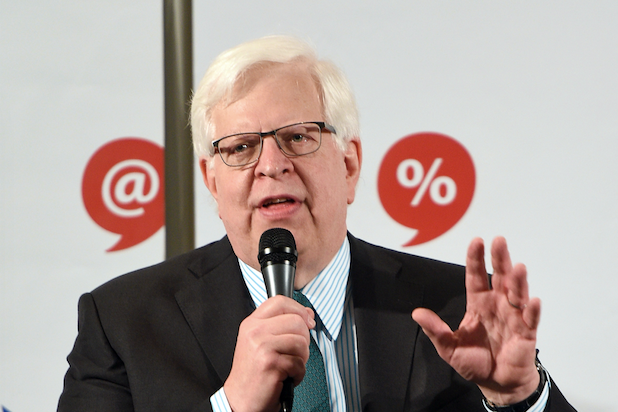 Conservative radio host Dennis Prager said he finds it “disgusting” that “the left has made it impossible to say the N-word any longer.”

In a clip first flagged by Media Matters for America’s Jason Campbell on Thursday, Prager responds to a caller who asks why he will say an anti-Semitic slur — that the caller himself also says in full — but not “the N-word.”

“Why didn’t I say ‘K-word?’ Because the left has made it impossible to say the N-word any longer,” Prager replied. “That’s disgusting. It’s a farce. It’s the only word that you can’t say in the English language.”

He went on to say “the left doesn’t give a damn” about the anti-Semitic slur: “The left runs the country in the culture. The Republicans have the Senate and the presidency and that’s very important, but the culture… And the more the left controls, the more totalitarian it is. That is not an attack. It’s a statement of fact, like ‘two plus two equals four.’ It is idiotic that you cannot say the N-word. Idiotic.”

“Of course, you should never call anybody the N-word,” he continued. “That’s despicable.”

On Wednesday’s “Full Frontal,” comedian Samantha Bee roasted Prager’s media outlet, calling the Prager U website “as much of a real college as Monsters University.”

“If your aim is just to scare people, at least one of them offers an actual diploma,” she said.

For the record, the Prager U (short for “university”) website has a disclaimer that says it “is not an accredited academic institution… but it is a place where you are free to learn.”

Bee said that unlike Fox — which she said “continues it’s lifelong quest to scare your grandparents into hoarding Franklinmint coins” — Prager U’s target audiences is the children and teens that make up Gen Z. Some of the Prager U videos she used to highlight her stance on the site included ones with messages like, “If sex isn’t real, why would any woman feel violated by an uninvited touch?” and “The left is destroying the Boy Scouts.”

Prager spent much of his show Thursday discussing the TBS segment.

A representative for Salem Radio did not respond to a request for comment.

Dennis Prager complains “the Left has made it impossible to say the N-word any longer,” adding “It is idiotic you cannot say the N-word. Idiotic” pic.twitter.com/Gd012Dw2ZD