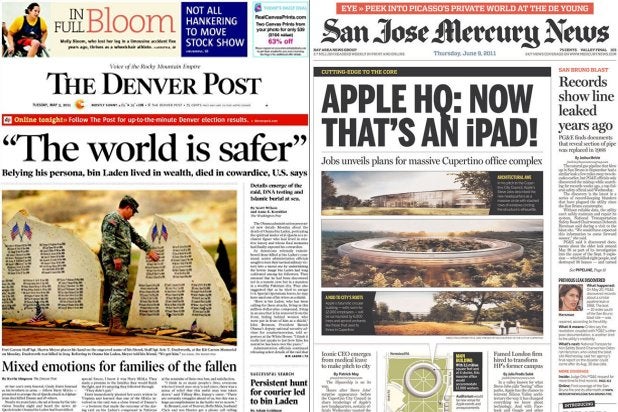 Digital First Media, the nation’s second largest newspaper chain and owner of The Denver Post and San Jose Mercury-News, has put its newspaper business on the block.

The company, owned by the hedge fund Alden Global Capital, announced Friday that it had hired UBS Securities to “evaluate and consider strategic alternatives” that could lead to the sale of some or all of the company, or nothing at all.

“We believe we have many options available to us to maximize the value of our businesses for our stockholders and the board of directors has therefore decided to assess the full range of these opportunities,” CEO John Paton said.

Also read: Do Print Spinoffs Spell Death of U.S. Newspapers? No and Here’s Why

Digital First Media was created in December 2013 after the merger of Denver-based MediaNews Group and the Journal Register Co.

“The strategy we pursued was to put the companies together and to drive digital revenue relentlessly,” Paton added, revealing that the combined company is closing in on $200 million in digital ad revenue annually.

Paton did clarify that there have been no formal discussions regarding a sale at this time, saying that “one of [the] benefits of making these announcements is you end up testing the marketplace for all of those options, rather than doing it theoretically.”

The company noted that spin-offs of print publishing by media companies have received a good reception from investors. Analysts anticipate that DFM’s print assets will have a far better chance of selling in regional clusters than as a whole. Its newspapers are spread across 15 states.

Prior to this development, Digital First had been working on eliminating its many real estate assets, putting 51 properties on the market in August, including several newspaper buildings. It also shuttered its experimental digital newsroom Thunderdome in April, though Paton said this latest development is unrelated to that.

The Thunderdome project was a plan to create a news-content partnership on a centralized digital platform with the aim of gathering nonlocal news and distributing it through the company’s local newspapers. Eliminating it cut approximately 100 jobs, including several executive level ones, as part of a strategy to remove about $60 million from DFM’s $1.15 billion total annual expenses, while reinvesting heavily in digital business, according to the Columbia Journalism Review.

It was also the first time the potential for Digital First Media to try and sell off its print newspaper properties was suggested in the media. Eliminating all or some of its print assets would allow DFM to move more fully into the digital side of its business, where it clearly has strong interests.

“The news information industry in America is undergoing a period of seismic change, defined by the need to consolidate to rapidly compete in a digital world,” Paton said. “The companies that will succeed are those which have meaningful scale and digital expertise. By anticipating the rapid revolution in our industry and responding to stay ahead of the curve, DFM has clearly emerged as a leading player, based on the high quality of our assets and the extensive work we have done to transform them into multi-platform products.”

And yet, the company isn’t beyond taking even simpler cost-cutting measures as well. At the York Daily Record in Pennsylvania, the company intentionally cut power on Wednesday for nearly two hours as an admitted measure to “save money on our electric bill,” according to an internal memo.

Staff members were invited to either work from home, or take advantage of the natural light in the newspaper’s conference room to work. Backup generators kept major systems and computers working, but the air conditioner was not one of them.

Below is the memo Paton sent to employees of DFM on Friday:

This morning we are announcing that our company, Digital First Media, is working with the investment bank UBS to review the strategic alternatives for our business.

Strategic alternatives – what does that mean exactly?

Well, it could mean we decide to sell the company. Or sell parts of it. Or expand it. Or stay the course.

DFM is a company with a successful strategy that drives results. And that means we now have options – options that we should now review to determine what is best for our future.

After a rocky five years, the newspaper industry is firmly back on its feet again.

Many of the largest companies in the media business have spun off their publishing assets and they have been well received by the public markets with healthy balance sheets and plans to drive their digital future and the capacity to grow.

Other than the usual die-hard skeptics, it is now a given that newspapers, as multi-platform news organizations, will thrive in the future as the best and biggest providers of local news and advertising in their markets.

But scale is the key to that future. Scale to build the products our customers want. The products we will need in the future for news or sales will look nothing like they do now. Any newspaper company’s future will rely upon its ability to build those products fast and as cost-effectively as possible.

So, we are now reviewing all of those options – those strategic alternatives – that best position our company for the future.

I am not sure of the outcome of that review or how long it will take.

But I do know this: As employees, the best thing we can do while this review is underway is to keep doing what we have been doing best these past years – producing unsurpassed local journalism; serving our customers’ needs and continuing to boldly experiment with our digital future.

I will do my best to keep you informed as this review progresses.