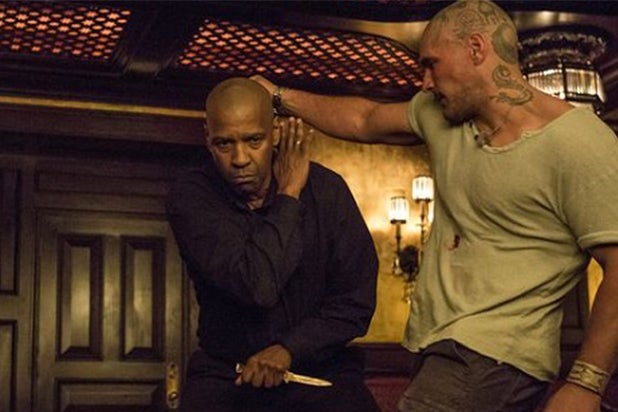 Denzel Washington killed the competition and the bad guys this weekend with his action thriller “The Equalizer,” and he did it without a car, a sidekick or a gun.

Washington plays Robert McCall, an ex-special forces op living under a new identity in the crime drama directed by Antoine Fuqua. The film, which — propelled by a huge body count and a series of over-the-top scenes.

By day, McCall manages a massive hardware store in Boston called Home Mart. But don’t be fooled by his pretty smile, dad jeans and work apron. When the sun goes down, this cold-blooded good Samaritan has no problem taking out crooked cops and Russian sex traffickers with unorthodox weapons like a pocket knife, a corkscrew and his fists — not to mention a trusty watch.

Teddy and his crew don’t stand a chance. (Sony Pictures)

When he’s not battling the bad guys, McCall battles his never-ending insomnia by sipping tea and reading books in a neighborhood diner. At that diner, he meets a Russian-born teen prostitute named Teri (Chloe Moretz). Eventually something terrible happens to Teri, and McCall springs into action. As he hunts down the Russian pimp and his associates who left Teri clinging to life, his crime-fighting antics become more outrageous with each passing moment.

No car, no problem:
James Bond has an Aston Martin, but why waste money on a European luxury car when you can ride a Boston city bus? Somehow, McCall manages to track down a seemingly endless list of dirty cops, and Russian mobsters without ever getting behind the wheel of a car. He even hops on the bus for a rendezvous with Teddy (Marton Csokas), a dangerous Russian fixer who’s been sent to the U.S. to eliminate McCall.

McCall don’t need no stinkin’ gun:
This vigilante is a cold-blooded killer and he takes out the bad guys without a firearm. While he’s not opposed to snatching up an Uzi from a heavily armed Russian gangster and using it to blow the guy’s head off, McCall is just as adept at killing with a corkscrew through the chin, barbed wire around the head or a power drill to the skull.

It’s tea time:
McCall is always three steps ahead of his targets, except at night when he stops for tea. We’ve never seen a trained killer so obsessed with sipping tea. He even takes his own tea bags to the diner each night — after a ritual of carefully wrapping them in napkins. He never orders food, just a cup of hot water to accompany the tea bag. This place definitely isn’t one of those hipster spots in L.A. where they’d ask you to get out and make room for someone ready to spend real money.

Wait, now he’s in Russia?:
We never see him get on a plane or a boat. But somehow at the end of the film, McCall pops up in Russia. Without any help from a sidekick, he manages to get inside the heavily fortified compound of Russian crime boss Pushkin. Once he takes care of Pushkin, McCall slips out of the mansion without making a sound. It’s a preposterous ending even for a movie, but hey, McCall is “The Equalizer.”