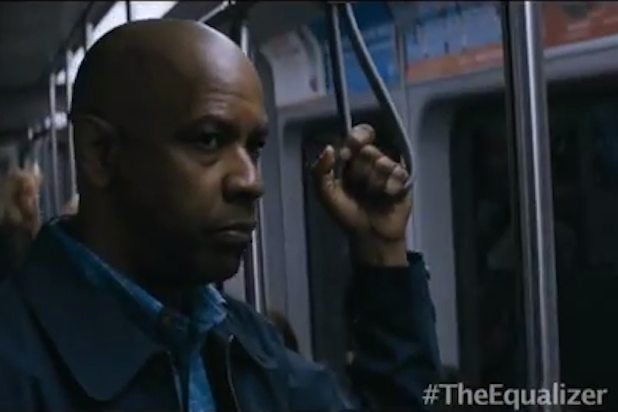 It’s that time of year before the grand onslaught of award contenders, so what better way to wait it out than with an extremely violent revenge fantasy?

“The Equalizer” reunites Denzel Washington with “Training Day” director Antoine Fuqua. While audiences won’t be treated to another Oscar-caliber performance from Washington, some critics are enthusiastically recommending the film, qualifying their zeal with, “If you’re into this kind of thing.”

Also read: Dependable Denzel Washington to Dominate With ‘The Equalizer’

Other critics were enamored with the notion that Washington is still kicking ass at age 59. James Rocchi of TheWrap tempered audiences’ expectations by noting that the film takes a while to develop character.

“Anyone expecting kick-started action from the jump will be mildly disappointed,” Rocchi wrote. “Washington is terrific here, a blue-collar Bourne far from the champagne sophistication of Bond, his astonishing physicality springing out in his action scenes and in his decisive moments while still suggesting the calm, collected thought before each brief burst of violence. Washington is that rarity: an action-film star capable of gravitas and feeling, an actor capable of selling fight sequences and carefully contemplated plans that form in the instant between seconds.”

And the New York Post’s Lou Lumenick noted that while the film isn’t terribly original, Washington’s performance is worth the ticket price.

“There’s nothing terribly original about the script by Richard Wenk (who co-wrote “Expendables 2” with Sylvester Stallone), but Washington is a master at putting his own inimitable and stylish spin on even the most familiar situations,” Lumenick wrote.

And then there were the critics who felt as tortured watching the film as Washington’s on-screen victims. Entertainment Weekly’s Joe McGovern called the film as watchable “as slaughterhouse footage.”

“Fuqua and writer Richard Wenk have taken the outline of a 1980s CBS show and turned it into one long and loathsome bore of a movie,” McGovern wrote. “The plot has been gerrymandered so that we sympathize with the protagonist’s plight no matter how many goons he gores through the chin with a corkscrew.”

A.A. Dowd at The A.V. Club called Fuqua “an action-junk journeyman still dining out on the 13-year-old success of ‘Training Day.'”

Dowd also found the film dull, noting that “Washington’s badass Samaritan is basically unbeatable — and so watching him dispatch the various thugs that drift into his line of vision becomes boring quickly.”

The AP’s Jocelyn Noveck also calls the film boring, but not “a terrible movie, as action sagas go.”

“You could do worse than watch Washington kick butt for two hours (actually, a little more),” Noveck wrote. “But it would be a lot more interesting to watch him struggle while doing it.”

So per the critics, if you want two hours of gore and Denzel, this is the film for you.