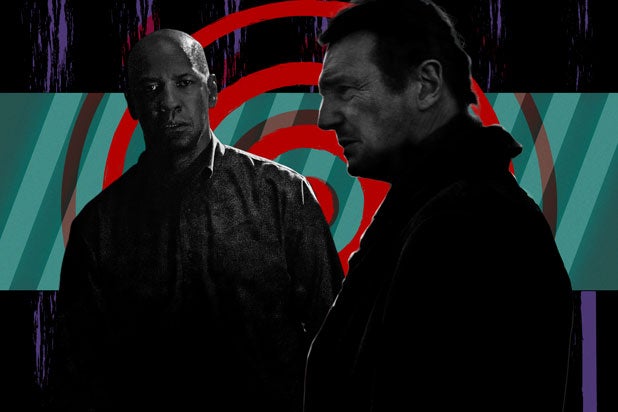 Two of Hollywood marquee tough guys — Liam Neeson and Denzel Washington — will battle at the box office over the next couple weeks.

Neeson will get the first punch in Friday, when he opens in Universal Pictures’ R-rated thriller “A Walk Among the Tombstones.” Washington will open one week later in Sony’s “The Equalizer,” another R-rated thriller.

“A Walk Among the Tombstones,” based on the novel of the same name by Lawrence Block, features Neeson as an ex-New York cop and private investigator hired by a drug dealer to find his kidnapped wife. Veteran Scott Frank writes and directs.

The Antoine Fuqua-directed “The Equalizer” is based on the 1980s CBS TV series starring Edward Woodward. In this film, Washington plays Robert McCall, a man trying to put his mysterious past behind him, who nonetheless steps in after he meets a young girl under the control of ultra-violent Russian gangsters.

Having two similar movies that target the same audiences arrive within a week of each probably won’t help either film at the box office. In a sense, Sony picked the fight when it shifted “The Equalizer” from its original April release date to Sept. 26. But the fact is that fall has become a crowded corridor, and there weren’t many options before the end of the year. Even these dates won’t give either film a lot of time to find an audiences, since Ben Affleck’s thriller “Gone Girl” — another film targeting mature moviegoers — opens on Oct. 3.

Both Neeson and Washington are proven draws in action films. Neeson’s tough guy career hit new heights after the first “Taken” film in 2009, which came 25 years after his star-making turn in Steven Spielberg’s “Schindler’s List.” Since then he’s scored with action films “Clash of the Titans” ($493 million globally), “Taken 2” ($376 million), “Wrath of the Titans” ($305 million) and “Non-Stop” ($202 million).

Most of Washington’s biggest box-office hits have been thrillers or action films. “American Gangster” brought in $266 million worldwide, “Safe House” ($208 million), “Pelican Brief” ($195 million) and “The Book of Eli” ($157 million).

Washington may rate the edge on this one, at least in terms of openings. Universal is expecting Neeson’s “Walk in the Tombstones” will do mid- to high-teen millions in its debut his weekend, while early projections for “The Equalizer” opening are in the $25 million range. Sony’s confident and has already discussed a potential sequel. It would be the first in Washington’s career, which spans more than 40 films.

“This seems like the perfect role for Denzel,” said Exhibitor Relations vice-president and senior analyst Jeff Bock. “It’s kind of him against the world, and that’s how people like to seem him, and this looks to have an edge as well.”

He thought the presence of Fuqua, who last teamed with Washington on “Training Day,” would provide a boost for “The Equalizer,” too. Washington won the Best Actor Oscar for his memorable performance as a very bad cop in that 2001 crime drama.

Also read: Denzel Washington Wants to Be the Next James Bond: 5 More Things ‘The Equalizer’ Revealed on Reddit

“That was a great film, and I think a lot of moviegoers will remember that,” he said.

Regardless of who wins this particular box-office smackdown, Bock said both actors should continue to be bankable action stars despite their age. Neeson is 62, while Washington is 59.

“Unless they do ‘Expendables 4,’ they should be able to make these kind of movies for some time,” he said.