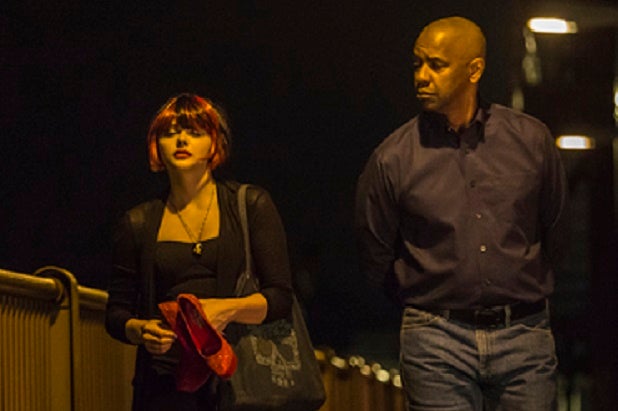 Denzel Washington came out with guns blazing at the box office on Friday.

“The Equalizer,” the action movie re-teaming him with “Training Day” director Antoine Fuqua, blasted its way to No. 1 with a $12.6 million first day. That puts the R-rated “Equalizer,” based on a 1980 TV show and co-starring Chloe Moretz, on pace for a weekend haul of around $35 million that will easily dethrone last week’s top movie “The Maze Runner.”

On its current pace, “The Equalizer” will be among the best September openings ever. “Insidious Chapter 2” ($40.2 million) and “Sweet Home Alabama” ($35.6 million) are the live-action leaders, with the animated “Hotel Transylvania” tops with $42.5 million.

That’s all good news for Sony Pictures, which co-financed the $55 million “The Equalizer” with Village Roadshow and Lstar Capital, and already has writer Richard Wenk working on a sequel. If that happens, it would be the first for Washington, who won a Best Actor Academy Award for 2001’s “Training Day.”

Sony had “The Equalizer” in 3,236 theaters, including full IMAX and premium large format runs, and first-night audiences gave it an “A-” CinemaScore. That’s a higher mark than most critics have given the film, which is at 58 percent positive on review aggregation site Rotten Tomatoes. The gritty thriller played like a date movie, at just 52 percent male, and older with 65 percent of its crowds over the age of 30.

If Fox’s “The Maze Runner” can maintain its current pace, it will come in between $16 million and $17 million. That would be a roughly 50 percent second-week drop for the action film starring “Teen Wolf” star Dylan O’Brien, a solid hold that would lift its domestic total past $57 million. “Maze Runner” is already well over $120 million worldwide and Fox has commissioned a sequel for next September.

If “The Boxtrolls” can hit $17 million for the weekend, it will be a solid start and could be the best opening ever for Laika, the production company owned by Nike co-founder Phil Knight and run by his son Travis, who is both the CEO and an animator on its films.

First-night audiences at 3,464 theaters gave the “Boxtrolls” a “B+” CinemaScore, in line with the critics who have it at 71 percent positive on Rotten Tomatoes.

“This Is Where I Leave You,” the R-rated ensemble family comedy with Tina Fey, Jane Fonda and Adam Driver, brought in $2.1 million for fourth Friday and is looking at a roughly $7 million second weekend. That would be just a 39 percent drop, an encouraging sign for Warner Bros., which is hoping the mature-skewing comedy can play well over the next couple of weeks.

Universal’s R-rated Liam Neeson thriller “A Walk Among the Tombstones” took it on the chin from “The Equalizer” in its second weekend. It brought in $1.3 million Friday and finished seventh behind “No Good Deed” and “Dolphin Tale 2.” It’s heading for a $4.2 million three-day total, which would be a steep 67 percent drop from its opening weekend.

“Guardians of the Galaxy,” “Let’s Be Cops” and “Teenage Mutant Ninja Turtles” rounded out the top ten. Overall, the box office was running about even with the same weekend last year, when “Cloudy With a Chance of Meatballs 2” was tops with $34 million.

On the specialty front, CBS Films’ “Pride” took in $23,466 from six theaters for a per screen average of $3,911. Audiences gave the fact-based tale of a group of lesbian and gay activists in the U.K. who raised money to help families affected by that country’s 1984 miners strike an “A” CinemaScore. That’s in line with reviewers, who have it at 93 percent on Rotten Tomatoes.