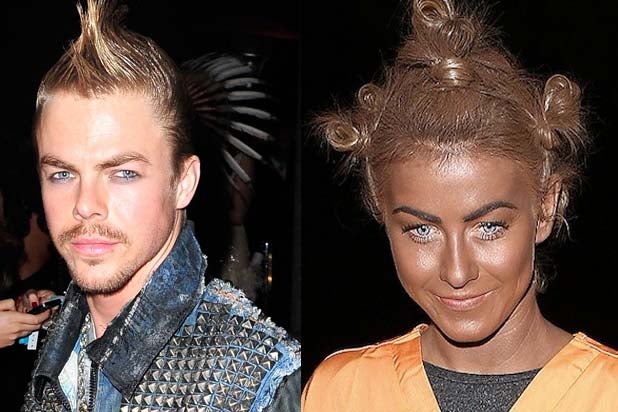 “Dancing With the Stars’ choreographer Derek Hough loves and supports his younger sister, Julianne, but even he admits her “Orange Is the New Black” blackface Halloween costume was in bad taste.

“Obviously, it wasn’t her brightest moment in her life,” Hough told E! News backstage at Monday night’s taping of his ABC reality competition series. “But hopefully we can move on.”

Julianne, a former “DWTS” dancer who is now better known for her acting, attended a Halloween party last Friday dressed as Crazy Eyes from the Netflix series — and tried her hardest to look as accurate as possible.

The face paint she wore to mimic the character’s skin color sparked an immediate backlash, which the “Safe Haven” star quickly apologized for.

“I am a huge fan of the show ‘Orange Is the New Black,’ actress Uzo Aduba, and the character she has created,” Hough tweeted last Saturday. “It certainly was never my intention to be disrespectful or demeaning to anyone in any way. I realize my costume hurt and offended people and I truly apologize.”

Her brother — who attended the same Hollywood Halloween party — backed her innocent intentions, noting “she’s the sweetest thing ever.”

“She is just beyond beside herself,” Hough added.