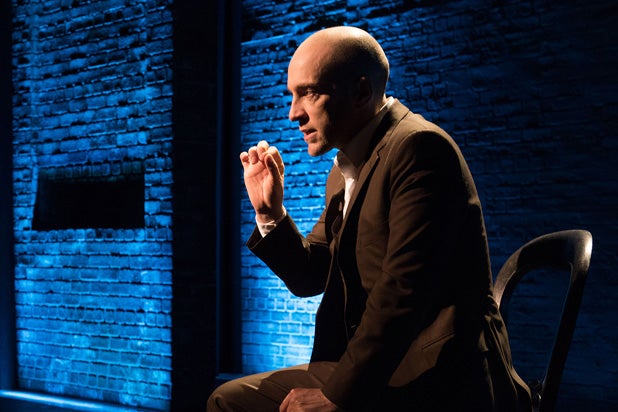 A version of this review was previously published in 2017 when the “Derren Brown: Secret” played at Off Broadway’s Atlantic Theatre Company.

The British illusionist, who has several specials streaming on Netflix, goes way beyond the usual brand of magic here. The Playbill bio calls what Brown does a “unique brand of mind control, suggestion, showmanship and illusion.” Left off that list is “distraction.” At the beginning of “Secret,” Brown calls attention to a banana that he has placed on stage under a tiny spotlight. Twice that banana disappears without our seeing it disappear, and not due to some trap door or mirrors. Brown has distracted us, and he is a most beguiling distracter.

The big surprise of “Secret” happens before you enter the theater. Ushers reveal that it is a two-and-a-half-hour show with an intermission. In this age of 90-minute nights at the theater, “Secret” looks to be the “Gotterdammerung” of magic shows. Brown’s very leisurely pace is part of the distraction. He performs very few stunts, and occasionally you may find yourself not paying attention, which is when all the magic happens. And a lot happens during that intermission, probably.

But back to those audience members and their secrets. At the performance reviewed here, we learned that one young law student did not want to follow his father into the funeral business, and that another theatergoer had a third nipple, which he promptly displayed by lifting his T-shirt.

Brown is great at setting you up to believe that so much more will be revealed: He cautions us repeatedly during his mind-reading act not to think of anything really bad, like an extramarital affair, otherwise he may have no choice but to just blurt it out from the stage.

Not to fear: Brown and his collaborators — the directors and co-authors Andrew O’Connor and Andy Nyman — are first-rate at soliciting willing volunteers and leaving the rest of us cowards to our terrible secrets.

Brown’s showmanship is never more apparent than in the second act when he reveals that we’ll be treated to a short film. It turns out to be not much of a film. But Brown’s build-up regarding the effect this movie may have on us is very much like those warnings at the end of a TV commercial for the latest cholesterol or diabetes drug. His list of possible dire symptoms dares you to watch. No doubt about it: Brown is the William Castle of illusionists.