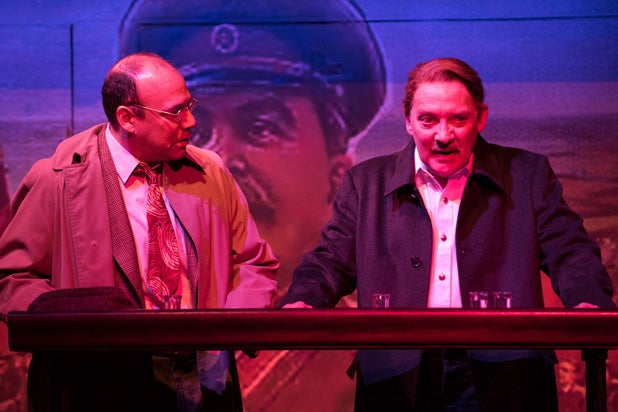 After one long viewing and one quick reading, it’s difficult to say if Rajiv Joseph’s “Describe the Night” is a great play or a great big soap opera. Since most theatergoers, including this one, would rather sit through a big soap opera than a great play, especially one that’s three hours with two intermissions, let’s start with the playwright’s flair for soap opera.

Without a doubt, Joseph knows how to tell a sprawling, convoluted tale that spans decades in “Describe the Night,” which opened Tuesday at Off Broadway’s Atlantic Theater Company. He also knows how to keep that saga from becoming disjointed, although that might not seem to be the case in the multi-scene first act that spans nearly 100 years.

In the first two scenes alone, Joseph jumps from the Polish-Russo War, where the writer Isaac Babel is working as a wire-service journalist, to a car rental at the Smolensk North Airport, where an airliner crash has just killed the president of Poland as well as 18 members of that government’s parliament. Slowly and with great craftsmanship, over the course of three hours and many more scenes, Joseph puts the many disparate pieces together to create a broad panoramic portrait of totalitarianism and thought control in the old Soviet Union and the new, emerging Russia.

With theatrical derring-do and much make-believe, Joseph connects two real-life events — the persecution of Babel (“Red Calvary,” “Tales of Odessa”) and the 2010 plane crash on Russian soil — and journeys in between to stops in East Germany before, during and after Glasnost and the fall of the Berlin Wall.

If that sounds dreary and painful in a Soviet sort of way, Joseph’s soap-opera tendencies make the story anything but. He peppers his narrative with jaw-dropping coincidences, truth-telling serums (a soup, actually), misidentified children, physical seizures, infidelities and a roller-coaster ride in the career trajectory of the play’s two villains.

Bad guy number one: Nikolai Yezhov, who began as a captain in the Russian Red Calvary and eventually headed the Secret Police (the future KGB) before he fell out of favor with Stalin, who had him declared a “political unperson,” and then executed him in 1940. In an outrageous bit of dramatic license, Joseph lets his Nikolai live a few more decades to turn him into a “living relic” who presides over a huge library of Soviet secrets that will soon be replaced by one small floppy disc.

Equally fantastical is Nikolai’s friendship with Isaac Babel, which quickly goes south for reasons having more to do with an extramarital affair than politics.

Isaac is the play’s moral center. As a writer of short stories and diaries, he believes in the difference between fact and fiction. Nikolai believes it’s all a matter of the state or the opinion of whomever is running the state. Throughout “Describe the Night,” Joseph has his characters drop lines like “Never confess! Doesn’t matter what, never confess!” and “The lie is what you haven’t said,” and the one that really strikes home: “You’re a media person, and so you … love to make up stories that are more interesting than what the truth is.” That last one is perhaps a bit much, but Joseph never resorts to using the term “fake news.”

Danny Burstein makes Isaac enormously deferential to the rough, boorish Nikolai, as well as enormously in love with the tyrant’s emotionally distraught wife, Yevgenia. Burstein is ideally cast here, but one wonders what an actor of his power and range might have done with a brute like Nikolai. Zach Grenier plays Nikolai like a brute, verging on a buffoon, and so the character’s huge arc from powerhouse to has-been doesn’t fully register. Tina Benko’s Yevgenia achieves real poignance in her scenes in an asylum, but like Grenier, the actress often turns the character into a clown.

“Clown” isn’t too strong a word here. There’s much absurdist humor in Joseph’s writing. Under Giovanna Sardelli’s direction, Grenier and Benko don’t find the right balance between the human and the outlandish. Sardelli veers off in other ways. When Isaac and Yevgenia’s daughter (Rebecca Naomi Jones, being very understated in her extreme duress) escapes to the West, Tim Mackabee’s set and Lap Chi Chu’s lighting design turn it into a real event, especially if you’re sitting in the first two rows of the theater. An elongated drawer in Nikolai’s antiquated library, on the other hand, fairly groans from all the effort.

After Glasnost, Nikolai finds himself replaced by a different kind of autocrat in the person of Vova. Playing villain No. 2, Max Gordon Moore delivers the perfect blend of dramatic overstatements, mixing them with a subtle array of insecurities that drive a lowly KGB agent into becoming a corrupt politician of “enormous stature.” Think Putin.

Crushed under Vova’s power is a young couple we meet at the beginning of the play. Feliks and Mariya, thrown together in a car rental at the airport, attempt to both hide and escape in very different ways. Stephen Stocking and Nadia Bowers, two fine actors, make real the terror of living a lost life and how commonplace that tragedy continues to be.

Grand soap opera or great play, “Describe the Night” is that rare must-see in the theater.