Change is looming at Universal Pictures, where weeks of indecision over the leadership of the company have sown anxiety within the studio and frustration outside of it.

Universal Studios President Ron Meyer has been mulling a change at the top executive ranks for the past two months in the wake of the studio’s poor financial performance this year. Big budget flops like “Land of the Lost” and expensive underperformers like “State of Play” have not helped, while parent company General Electric has stepped up the pressure to see a demonstrable shift in direction.

But Wall Street waits for no slate.

Despite a public statement in August that things may remain status quo, indicators are that Meyer is ready to make a decisive change in the coming days, according an executive familiar with the company’s thinking. 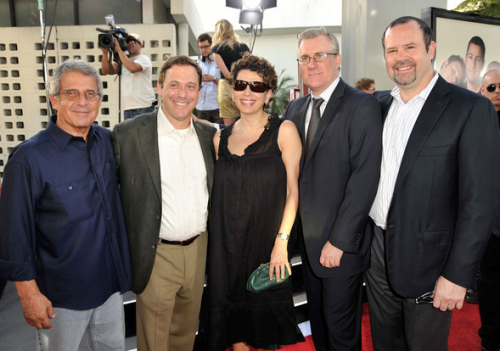 Contenders to take the place of studio co-chairmen Marc Shmuger and David Linde have been lobbying the top NBC-Universal bosses for weeks (or their surrogates have).

Among those who’ve been known to express interest have been producers Scott Stuber and Marc Platt, Warner Brothers Pictures Group chief Jeff Robinov and an assortment of top agents.

But those most likely to step into the coveted positions are executives from within the company. Those most often cited as likely to rise are favorites of Meyer — marketing chief Adam Fogelson and head of production Donna Langley, who has clashed with Shmuger this year.

Meyer is known to be eager to repair relationships with talent that have been bruised in a climate of cutbacks and disappointing box office results.

Replacing Shmuger and Linde would be expensive, as each just signed new four-year contracts in January of this year.

Alternate scenarios have been floated, including one in which Linde might continue to run Universal’s profitable international business.

A studio spokeswoman declined to comment for this story.

But the pressure to make a decision has risen as the perceived leadership vacuum at the top of the studio has fed maneuvering and backroom politicking over the business of making movies.

Complaints from key producers working with the studio, such as Brian Grazer, Sean Daniel or Tim Bevan and Eric Fellner of Working Title, run the gamut of being unable to get a consistent answer from a single executive to passive-aggressive eye-rolling from Universal colleagues. Producers and talent say they are unable to get clarity on their projects in the current climate.

“If you’re a producer, you’re feeling chaos in ways that you’ve never felt before,” said one prominent executive who works with the studio frequently but declined to be identified. “It’s completely taken the fun out of the process.”

Meanwhile, General Electric has aggressively demanded cuts at the studio because of the uncooperative economy, as well as as NBC’s fourth-place performance among the networks. Universal executives have denied reports that the studio has essentially shut down development for the rest of the year, even as they confirm that budget meetings to impose cuts are underway. (Update: a Universal executive confirms that there is a "directed slowing" of projects that is ongoing, meaning that there is essentially no new development this year.)

Universal is in sixth place among the major studios, having taken just 8.6 percent of market share for the year, according to Boxofficemojo.com.

The change at the top would come, ironically, despite significant successes by Shmuger and Linde, who oversaw two of the most profitable years in the studio’s history, with hits like “Knocked Up” and “The Bourne Ultimatum.”

But this year, despite a hit in “Fast and Furious,” expensive movies like “Land of the Lost” tanked, and those at the end of the summer, “Funny People,” “A Perfect Getaway” and “Love Happens” did little to change the studio’s dismal bottom line. (See full list of tepid summer movies.)

The studio’s biggest hope for the end of the year is Nancy Myers’ “It’s Complicated.” That film has good early buzz, but also had a hefty budget.