In Alexandre Philippe’s new indie documentary “The People vs. George Lucas,” a fan notes, "I owe George a lot," while another swoons, "The man unlocked a generation’s imagination."
Then comes this condemnation: “A lot of people view George Lucas as the antichrist."
Indeed, a kind of cognitive dissonance continues to unfold among the aging core group of rabid “Star Wars” fans. Five years after the much-maligned final live-action “Star Wars” chapter unfurled in theaters, creator George Lucas continues to be assaulted with fanboy criticism. 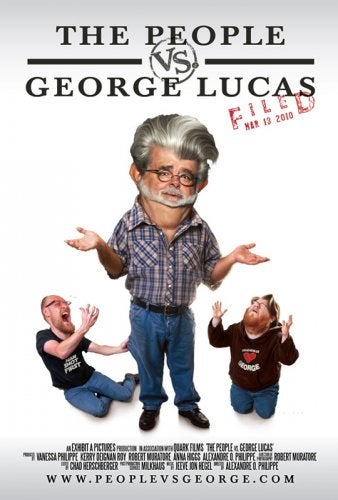 Yet, with a top-rated animated series going strong on the Cartoon Network, Lucas’ global licensed merchandise sales are almost as forceful as they ever were at $2.75 billion last year.
(See our slideshow: Ten Things ‘Star Wars’ Fans Hate about … ‘Star Wars’)
There are several new "Star Wars" projects in the works. And if White House Press Secretary Robert Gibbs being photographed just the other day carrying a "Star Wars" pop-up book while exiting Air Force One is any indicator, the property is as culturally relevant as it ever was.
Much like Mike Myers’ conflicted ruminations regarding Colonel Sanders in 1993’s "So I Married an Ax Murderer," Lucas has made it clear to the fanboys: "Oh, everyone is still going to eat my chicken."
“The criticism is of more interest to us than it is to George,” said Howard Roffman, who heads Lucas’ licensing division. “But if you look at all the indicators in the last 12 years, ‘Star Wars’ has rocked at the box office, it has rocked in DVD sales, and it’s rocked in licensing.
"We see it as one of the indications of why the brand is so strong. It evokes passion in people.”
That passion — both the good and the bad — is showcased in Philippe’s documentary, which created ample buzz at South by Southwest last week.
“The People vs. George Lucas” explores this strange, conflicted relationship that exists between the reclusive “Star Wars” creator and his most ardent adult fans.
From Lucas’ decision to have alien bounty hunter Greedo shoot first at Han Solo in the 1997 re-edited re-release of the original “Star Wars” (thus recasting Solo’s very nature in the eyes of the hardcore) to his choice to have Jar Jar Binks even exist in the prequel trilogy, rabid “Star Wars” fans have steadily turned on their god over the last 13 years.
But while their hero may have tainted his legacy with convoluted plotlines involving senate politics and trade wars, younger fans have absolutely been sold on the new-generation “Clone Wars” assets of the story, which were introduced in 1999 with “Star Wars: Episode I – The Phantom Menace.”
Last year’s $2.75 billion haul in retail merchandise — a core asset to the Lucas empire dating back 33 years — was only slightly off the $3 billion peddled in 2005, the last year a live-action “Star Wars” movie was in theaters.
Popular items include the “Lego: Star Wars” videogame series, a three-title set that has sold more than 20 million copies.
“They’re still ranked on top in terms of licensed toys,” said Tony Lisanti, editor in chief of License Global! Magazine. “They’re just as important as they’ve always been in terms of licensing.”
Interest in the franchise has been kept alive by the success of “Star Wars: The Clone Wars,” which is about to wrap its second season on Turner’s Cartoon Network.
The channel’s top-rated original series, and the No. 1 draw for boys 6-11 on cable TV, “Clone Wars” proved popular enough with adults last year to convince Turner programming officials to run it on TNT, too.
LucasFilm currently has a second animated “Star Wars” series, one more humorous in tone and aimed at younger kids, in development.
Roffman confirmed that Lucas wants to produce a live-action "Star Wars" TV series of some kind, as well, but offered no details about a timeline for that project.
There’s also a “Star Wars” concert tour, based on John Williams’ iconic score for the franchise, currently meandering its way around Europe.
“We don’t deny that (some of the newer ‘Star Wars’ content) has been polarizing with some people,” Roffman told TheWrap. “For some people who were in the original audience, the originals are their ‘Star Wars,’ and they’re not happy about anything that is different from that.”
Not that alienation has been bad for business. Despite generally bad reviews, not to mention sparking fan bloodlust, the three prequels released between 1999 and 2005 grossed $2.4 billion at the global box office.
Meanwhile, 2004’s release of the original “Star Wars” trilogy on DVD set first-day sales records, with Fox Home Entertainment tallying $115 million.
All of this commercial success has only served to bolster Lucas’ belief in his narrative vision in the face of what has often been vitriolic online dissent.
After fans hemmed and hawed about Jar Jar’s appearance in the first two prequels, for example, Lucas didn’t get rid of him in 2005’s “Episode III.” Instead, he made Jar Jar the guy who helps Palpatine become galactic emperor. Jar Jar now had a pivotal role in the "Star Wars" story.
“You have to understand how George Lucas works, and I’ve been working with him for 30 years,” Roffman said. “He’s driven by his own personal vision. He believes in the integrity of that, and he doesn’t believe in letting outside forces like studios and research interfere with the story he wants to tell.”
x