Inspired by Lawrence Otis Graham’s book, “Our Kind of People: Inside America’s Black Upper Class,” the series follows strong-willed, single mom Angela Vaughn (DaCosta) as she sets out to reclaim her family’s name and make an impact with her revolutionary haircare line that highlights the innate, natural beauty of Black women. 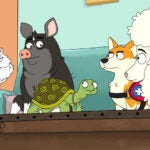 Luckett will play Leah Franklin-Dupont, a strong, confident, elegant businesswoman, who, along with her husband Raymond (Chestnut), sits at the top of the food chain of the wealthy, long-standing Black elite in Martha’s Vineyard. Per Fox, “Leah feels the pressure of her position, and a responsibility to give back to the Black community. But when Angela Vaughn (DaCosta) arrives and starts to shake things up and threaten her family’s legacy, Leah makes it her mission to bar Angela from acceptance into The Bluffs before she tears down everything Leah’s family has built.”

Gist, whose credits include Daniels’ Fox musical drama “Star” and ABCs “Mixed-ish,” is writer and executive producer on the series.

Additional executive producers include Daniels and Marc Velez for Lee Daniels Entertainment, Pam Williams and Claire Brown for The Gist Of It Productions, Ben Silverman, Howard T. Owens and Rodney Ferrell for Propagate and Montrel McKay.