Note that this review applies only to the main portion of “Deus Ex: Mankind Divided.” A separate review of the “Breach” mode will come at a later date.

The “Deus Ex” franchise is beloved for being, well, more than other video games. Gaming is no stranger to conspiracy thrillers, but none of the others can match the complicated and very thorough paranoia of “Deus Ex.”

In the tradition of many great mystery stories, “Deus Ex” games start out complex, weaving a ton of disparate threads into one over the course of dozens of hours. It’s not always neat — video games never are, given how so many aspects of them tend to fluctuate up to release, necessarily altering or damaging the storytelling along the way. But “Deus Ex” had its formula, and it usually worked: a naive character gets caught up in events, things get out of hand, and either by choice or circumstance that character ends up as the lynchpin for some kind of massive, world-altering event as the machinations of the Illuminati or some other controlling entity are dragged into the light.

“Deus Ex: Mankind Divided” deviated from that template from the start by bringing back the protagonist of the last game, “Human Revolution.” After all he’d been through, Adam Jensen was no longer naive. He wasn’t stumbling into a conspiracy. He was looking for one.

Also Read: 'Uncharted 4: A Thief's End' Review: One Final Step Back for the Disappointing Franchise

But, in another stark deviation from the “Deus Ex” formula, he only sort of finds it. And that’s because “Mankind Divided” forgets to ever bring its myriad plot threads together, coming to a close during what feels like the second act of this story. Leaving the rest, presumably, for an infinite number of future franchise titles.

Jensen is working, as “Mankind Divided” opens, for an anti-terrorism unit called Task Force 29. This group was formed to deal with the aftermath of The Aug Incident, in which people who had received mechanical augmentations — robotic arms, for example — all went nuts and began violently attacking everyone around them. The world is, as the title says, divided between “naturals” and augmented people.

The seven million “augs” remaining have become second class citizens, facing institutional discrimination from an establishment that now fears them. Park benches are designated “naturals only.” Augs are forced to ride in their separate subway car when they use public transit. Overzealous police ask any augmented people they see for ID papers. The city of Prague, where most of “Mankind Divided” takes place, has set up a horrendous ghetto known as Golem City where it likes to send augs to live in squalor. It’s a big ole racism metaphor, and it works — there’s never any question that it’s wrong to treat augmented people this way. It’s a far cry from a “Bioshock Infinite” and its ilk, which like to act like all sides of any conflict are wrong. 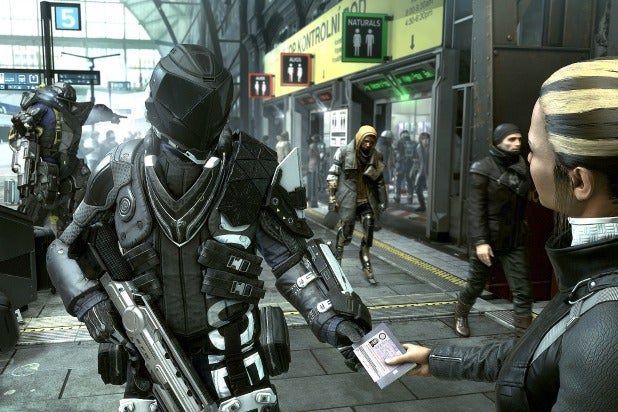 Also Read: Dear Video Games: Your Politics Are Showing, Whether You Like It Or Not (Commentary)

Meanwhile, a proposed United Nations charter would cement that second-class status worldwide. So a lot of augs, feeling to pain of living under a boot, decide to strike back. Task Force 29 is set up to deal with these “augmented terrorists.”

But Jensen, himself extensively augmented, is a double agent inside Task Force 29. He also works with the Juggernaut Collective, a hacker group that seeks to expose the behind-the-scenes controllers of world events.

In this game, that’s the Illuminati. The Collective thinks Task Force 29 is the Illuminati’s puppet, which is why Jensen works there. But the Illuminati has many puppets and, as always, there’s a lot more going on than meets the eye.

Our trip through this obtuse mystery and really awful world is a pretty great one. From purely a play perspective, “Mankind Divided” is easier to deal with than its predecessors, which tended to be overly complicated in how they handled play. Sneaking around is easier than it’s ever been, for one thing. This time around the game functions very tightly, especially in comparison with its antiquated predecessors — and, yes, I’m including 2011’s “Human Revolution” under that banner after playing this one.

Part of that is, I think, due to the inclusion of a variety of premapped control schemes for those playing with a gamepad. The “Standard” scheme in particular brings the overall feel into line with how so many other games handle, thus lessening the learning curve significantly. Jensen’s augmentations — you get to decide how Jensen’s mechanical parts will be upgraded as the game goes along — are still a mess to deal with, with too many options. However, it does feel as though you earn upgrades at a quicker pace than in “Human Revolution” making those augmentation decisions less painful.

The story is long and meandering, but not so much so that it’s impossible to keep track of. The pieces are (mostly) there for you to put together, should you have the inclination.

Also Read: How the Video Games Industry Created Its Own Cult of Toxic Fans (Commentary)

The problem is that Jensen himself never puts them together. “Mankind Divided” does not include a self-contained story, as the game ends after he deals with one of the Illuminati’s many pawns.

The man who becomes our big bad is clearly just a subvillain in the story. In a regular conspiracy thriller, he’s the sort of character our heroes confront only to be propelled deeper down the rabbit hole. Except in “Mankind Divided” the story just ends there.

Jensen knows there’s more going on, and afterward he discusses how now it’s time to go after the hands who were pulling the strings. I get it as the setup for a sequel, but that conclusion, or lack thereof, renders the experience of playing “Mankind Divided” totally unsatisfying while we wait for that sequel to arrive. It feels like the end of a TV pilot, except instead of the next part coming in a week it’ll be years, probably. Or, if we’re “lucky” the story will continue in chunks of downloadable content we have to pay for.

Which makes it hard to recommend “Deus Ex: Mankind Divided” right now. It had all the makings of a great video game, until it opted out of providing any sort of conclusion. For any game, that would be a knock on it. For the latest iteration of a franchise beloved for its storytelling, that makes “Mankind Divided” a huge disappointment.

20 Most Disappointing Video Games of All Time (Photos)

A lot of fans found ”No Man’s Sky“ lackluster, but that’s just the latest in a long line of letdowns

One of the games industry's most enduring traditions is promising much and delivering much less. But some releases miss the mark more than others, and this is the list of games that missed hardest.

While "No Man's Sky" is certainly a contender for this list, by the way, it's too fresh to include right now.