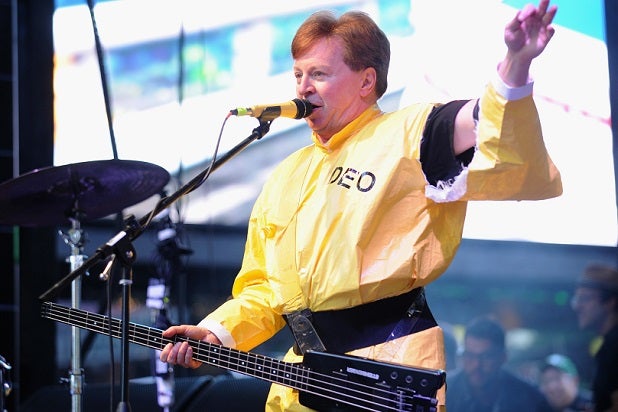 Jerry Casale is apologizing for his 9/11-themed wedding reception — even though he claims it wasn’t his fault.

The Devo co-founder took to Twitter to offer his apologies for Friday’s offensive nuptials, and to claim that he was “set up.”

“Deep apologies for all offended,” the musician wrote. “There is a real explanation and its [sic] not what you think. Surprise cake and pix to TMZ was a set up.”

Casale suggested that there’s more information to come, ending his message with, “TBC…” However, Casale’s Twitter account has remained silent since the apology posted Monday night.

TMZ first reported on the wedding reception, which featured a cake modeled after the Twin Towers, with the faces of Casale and his new bride, Krista Napp. The reception took place Friday — the 14th anniversary of the Sept. 11, 2001 terror attacks — at Michael’s Restaurant in Santa Monica, California.

It also featured box cutter party favors, and table setting cards that bore an image of a box cutter, with Casale and his new wife’s names engraved on it.

Casale said Monday that a friend of his got the cake and the place settings for him as a joke, thinking that the musician has a dark sense of humor, though Casale claims that the fact that he was getting married on 9/11 was a coincidence.

“One of the friends surprised me with the cake and the place settings and it’s because they thought it was really macabre that I was getting married on 9/11,” Casale said. “And I said no, it was just arbitrary.”