French filmmaker Jacques Audiard (“Rust and Bone,” “A Prophet”) brings his customary mix of muscular atmosphere and tense intimacy to “Dheepan,” about a trio of Sri Lankan immigrants making do in a gang-infested Parisian banlieue that is, in certain ways, as much of a prison as the war-ravaged country they left behind.

The winner of last year’s Palme D’Or at Cannes, and anchored by galvanizing performances from leads Jesuthasan Anthonythasan and Kalieaswari Srinivasan, it further cements Audiard as a singular chronicler of roiling souls desperately navigating a way out of circumstances that threaten to upend them entirely. Like his other electrifying work, “Dheepan” has the power to envelop you until you can barely breathe, yet it also seeds in touching moments of grace that give welcome breadth to the peculiar situation of its protagonists.

Those protagonists represent a class of people in global politics who have engendered a lot of headlines, but not a lot of thoughtful exploration: refugees in a sort of identity limbo. “Dheepan” opens with a man (Anthonythasan) in the bloodied uniform of Sri Lanka’s anti-government rebel group the Tamil Tigers, a dazed look on his face as he burns the corpses of colleagues. Subsequently, at a crowded refugee camp, armed with the passport of a dead man named Dheepan, he’s paired with Yalini (Srinivasan) — a forthright woman who’s recruited war-orphaned 9-year-old girl Illayaal (Claudine Vinasithamby) to play her daughter — and together the trio form a fake family in order to secure temporary visas and escape to France.

They’re relocated to a suburb in northeastern Paris called Le Pré (“the meadow”), where Dheepan becomes resident caretaker at a rundown housing project that, judging from the young men traversing the rooftops and the sketchy loiterers in stairways and vestibules, already has a kind of custodial contingent. That Dheepan and his makeshift family have landed in the middle of a thriving drug trade hub isn’t a terribly surprising story element for Audiard, who wrote the film with Noé Debré and frequent collaborator Thomas Bidegain. That’s because the world of criminal enterprise has often acted as both a familiar and destabilizing force in his movies, from the illicit grit of “Read My Lips” through to the offbeat romance “Rust and Bone.”

Here, though, the lawless milieu isn’t as consciously pulpy. It’s more a naturalistic background element, reflective of the kinds of societal hardships awaiting those with little recourse in choosing their fate. (In this way, “Dheepan” is closer to the director’s Arab-immigrant crime drama “A Prophet” than anything else.) 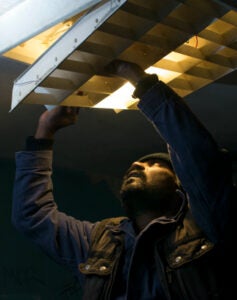 For a good portion of the movie, in fact, the encircling insidiousness is less of a narrative factor than the incremental cultural adjustments the psychically wounded Dheepan, Yalini and Illayaal have to make to establish their lives as a “family” in the eyes of those around them. The language barrier is one (another recurring theme of Audiard’s), but so is a reconfiguring of self to play a part. Yet as this threesome struggles to find an acceptable tenderness with each other that’s at first tolerable, then genuinely nourishing, and finally intimate, “Dheepan” sets in motion the environmental and emotional fissures what will inevitably threaten to tear apart these strangers and their fragile connections.

Yalini takes a job caring for an enfeebled older man whose apartment is a meeting ground for the drug operation, which spurs a burgeoning acquaintance with a local ringleader (Vincent Rottiers). Dheepan, meanwhile, finds his newfound sense of hard-won security eroding — first through a skittish reconnection with former colleagues, then by a turf war that erupts into violence. With nightmares taking hold, plus an obsession with safety, the dormant warrior in Dheepan begins to re-emerge.

Throughout, Audiard maintains a mostly taut mastery of his unfolding story, coolly working with cinematographer Eponine Momenceau (making her narrative feature debut) on visual themes of confinement and freedom, and darkness and light. At times it’s as if the movie’s pressurized urban jungle were a functioning but soul-sick organism, with its Tamil transplants trying their damnedest not to be rejected.

Though “Dheepan” is another triumph for Audiard, it could have just as easily not worked had its leads not been so affecting. Anthonythasan, himself an ex-Tamil Tiger in his teens who fled to France and became a published writer, is a compellingly haunted presence here, the will to survive practically beaming from his eyes — and in a final-act sequence of protective, vengeful rage, frighteningly so. Srinivasan, appearing in her first film, is similarly wonderful, brimming with righteous intelligence, humor, and vulnerability as she fumbles her way into a simulated domesticity that she’s surprised to discover may offer the best hope of an unexpected form of peace. They, along with the very fine Vinasithamby, are the nervously beating hearts of a movie that powerfully enables you to see what they see, and to feel what they feel.