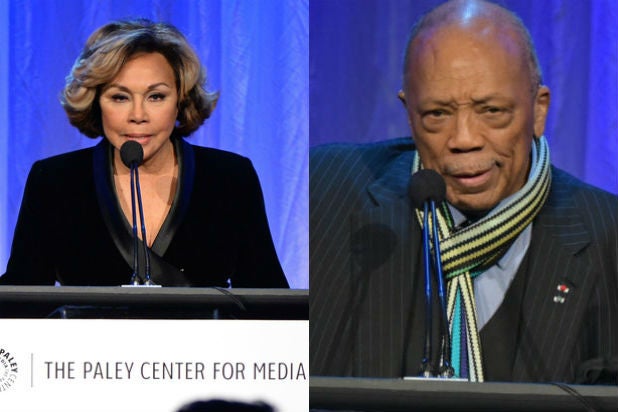 Legendary entertainers Diahann Carroll and Quincy Jones were honored at the Paley Center tribute to African-Americans on Television in Los Angeles.

Carroll, an accomplished stage actress and singer, broke significant ground when she starred in the 1968 series “Julia,” one of the series’ to star an African-American woman.

“I love this profession and I love knowing how fantastic [African-Americans] are in it,” she said. “You make me feel extremely proud. I’m about to have my 81st birthday. It’s been very hard hanging on to these strings so long, but I’ve had a hell of a good time.”

Media mogul Quincy Jones, one of the most prolific composers, record producers, and film producers in entertainment history, received a raucous standing ovation when he took the stage.

“Make me feel 19. I’m only 82,” Jones joked. “I’ve been so blessed to have been able to contribute to how we are represented and perceived. We’ve come a long way from the time when you didn’t see faces of color on TV. Today we have wonderful young talent in front of the scenes and behind the cameras and in the writers’ room.”

Black Entertainment Television (BET) was also honored for its 35 year anniversary since going on the air in 1980 during the ceremony Monday night.

“Diversity on TV matters,” BET CEO Debra Lee said. “It mattered 35 years ago when Bob Johnson founded BET and it matters today. The fastest way to get to know another ethnic group or religion or people with different sexual orientations is to see them portrayed and represented on TV in a respectful and responsible way.”