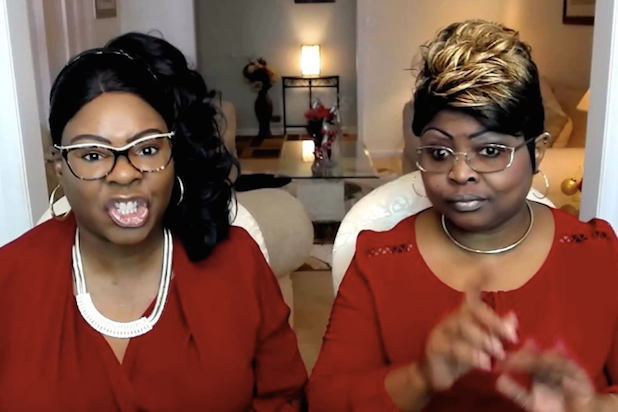 Conservative vlogging duo Diamond and Silk claimed on Monday that the rise in reported deaths from the coronavirus is a conspiracy by the media to make President Donald Trump look bad.

In a Facebook Live video that promised in its description to cover “the sorry ass media,” Diamond and Silk (or, legally, Lynnette Hardaway and Rochelle Richardson) reviewed the recent death toll. Note before reading their comments, the number of American deaths from COVID-19 is over 3,000, around the number of lives lost in the September 11 attacks. Monday was the first day the daily death toll exceeded 500.

“Here’s another thing: My president said on March the 24th — Tuesday this past week — my president said that he would love for America to be back up and running,” Silk continued, referencing Trump’s comment that he wanted Americans back to work by Easter. (Trump has since extended social distancing guidelines through the end of April).

Diamond insisted she “knew this was going to happen,” and Silk proceeded to define what “this” was: “At the time he said it, there was 25,489 cases with 307 deaths. Instantaneously, you had the media calling President Trump out. He wanted open by Easter. He wanted this open by Easter. Me and you was talking. I said, ‘Now watch the number of deaths go up. Watch everything increase because they wanted to make it look bad in front of our eyes.'”

Reports on March 21, three days before Trump’s comment about Easter, indicated a death toll of 307 people who were confirmed to have the coronavirus in the United States. Trump’s White House itself is reporting the real number of confirmed cases and deaths, which, to be clear, is not a media conspiracy.