Dick Johnson is very much alive in “Dick Johnson Is Dead,” which is one of the many meta qualities in this documentary by Kirsten Johnson. The film provides an unusually touching portrait of Johnson’s father and his slide into dementia, but it’s hardly a sentimental journey. Johnson developed a knack for risk-taking during her decades-long career as a documentary cinematographer (as recounted in her own 2016 doc “Cameraperson”) and here she concocts onscreen various ways her father could die.

The film, Johnson told TheWrap, “is me saying, ‘So I’m going to kill my father and laugh about it because I desperately don’t want him to die.'” In one scene, he trips down the stairs, and in another, he is struck by a falling air conditioner while walking down the street. What emerges is a confrontation with death — specifically the loss of a parent — that grows more profound as the film nears its conclusion.

Johnson’s general affability lends itself to a more personal discussion of her work and the topics she grapples with. Which is exactly how things progressed during a Zoom interview about her film (available now on Netflix), in which a cardboard cutout of her father’s face shared her screen. “He’s present and accounted for, as they say,” she quipped as our conversation began.

Is this film your attempt to have control over death?

Kirsten Johnson: Not to have control over it, but engage with it. And my best attempt to be defiant about it. To put myself in situations that would allow me to feel in such unexpected and powerful ways. To say to my dad, “You’re really disappearing. I really love you. What do we do about it?” And with stakes are that real. That’s what I was trying to do.

In one of the most touching scenes in the film, we see a funeral for your dad, where everyone shares memories of him. And though he’s declining due to dementia, he’s there to experience it. Why don’t we as a culture do that for everyone?
Yeah! I had this secret hope that this is going to take off. Now that I’ve done it, it’s going to be a thing, right? But I mean, it’s hardcore. I don’t think every human being is capable of it. Would I be capable of it? Probably, now that I’ve been through this. But it’s really scary territory. We all have so much to protect. So much tradition to protect.

In addition to the scenes where you stage his death, there are also fantasy scenes of him levitating off the ground and arriving in a candy-colored heaven. Why were those important?
I certainly wanted this to be different than when I do an observational documentary. Part of how we constructed the film was to think about going towards high-stakes things. So we also thought about the surreal quality of looking forward. It’s completely unimaginable looking forward to death, so I decided to really lean into it. It’s like, how do I truly engage with time itself? People say, “This a hyper doc” or “It’s a doc and it’s a fiction.” I’m like, no. What I’m talking about is what we have experienced, and what we imagine.

Your movie is rated PG-13 for “macabre images and thematic elements,” which is amusing.
I was really hoping for an NC-17 from the ratings board. I give all the credit for the PG-13 to stunt people in my film, who are involved in my dad’s death scenes. They actually risk their lives in the service of not being seen. All for our escapist fantasies.

And speaking of that, in some of these scenes we detect the influence that Buster Keaton has had on you. And also the “Jackass” guys.
I love them both. Buster Keaton was so complex, the way he used his body as the instrument, and just kept hurtling forward. It’s like, “You just dropped a house on yourself, dude. And now you’re up and at it for more.” And what’s happening in “Jackass,” too — I don’t mean “Jackass (Number) Two,” though I love “Jackass Two” — is the anticipation that comes with the stunts. It goes to that cathartic place, that nearly hysterical place where you can’t help but cringe and you can’t help but laugh. It’s such a death wish, but it’s such a communal death wish. That’s what’s really intriguing. 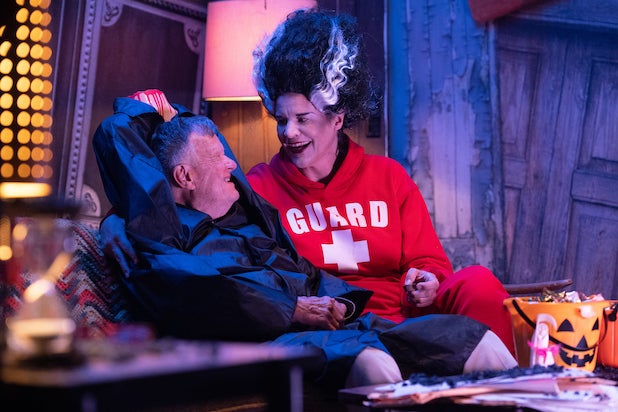 Your film resonated with me even more having been through the loss of a parent. My mom died of cancer about a year ago and I’ve had so many of the same thoughts you have in the film.
How are you sitting with her death now?

Still processing it, I think. We got to be with her during her last week, which meant a lot. You mention how the universe seems to reorder itself a bit after a parent dies. That’s very true.
When my mom died, the carpet got pulled out from underneath the world for me. Someone once said to me, “Oh, grieving never ends.” I thought, “Oh, that sucks.” But it’s so obvious. I mean, it certainly transforms. But that will mean different things, and grieving is not only crying and pain. In your case, you all got to be together, you all got to tell her you loved her. Before she died, she heard it. She heard it multiple times. But she died. And what you experienced during the week with your mom was unimaginable to you, but yet you remember the details of that week so vividly, right?

Absolutely, yeah.
You remember how everyone behaved, the fights that happened, the tears that happened, the hugs that happened. All of those things were familiar looking back at them. They were all completely unimaginable looking forward at it. And that’s what I think is so interesting about backwards/forwards perspective.

Yeah, it’s not something you can really rationalize. In my mom’s case, she’d gone into remission 10 years earlier, but it wasn’t until the very end of her life that I comprehended the idea that we could lose her.
The thing that’s so harsh with cancer and remissions is that when you get the first cancer diagnosis, it’s like, “Death sentence!” And then if you go into remission, you’re like, “Oh, no it’s not!” And then having experienced that initial, “I’m going to die” feeling, the protective stuff builds back up, right?

Yeah, there was a lot of that.
She lived with it a decade. Like, “Whoa, dodged that bullet.” And then when it comes back, I think there’s a disconnect there for the person. And no matter what we do, the worst thing could happen. This situation that we desperately do not want to be our reality.

I’d heard people say that you’re not really prepared for it until it happens. That didn’t fully make sense, until it did.
You don’t understand it until you’ve passed to the other side of it. I think the idea of parents and children, in particular — we experience our parents as fixed humans, so the idea that they could get a disease that could kill them is like, “What? That is not possible.”

Maybe that’s their parting gift? Their death opens us up to talk about this stuff in a way that we wouldn’t have.
What’s cool, and what I can say to you, is your mother’s going to keep giving you gifts. Your relationship with your mother is not going anywhere. You can talk to her. There’s a dialogue. I thought about my mom all summer long, because I’m now the mother of 8-year-old kids. Suddenly, I was like, “Oh, I’m trying to make a blackberry pie like my mom made a blackberry pie.” So it shifts. 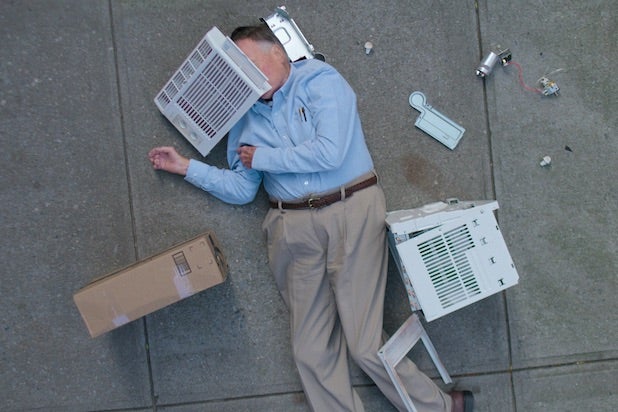 This is a pretty high-risk movie, in terms of the concept. You must have worried that some people would accuse you of bad taste, even though the film is much deeper than that.
One of the things I worried about was whether I’d meet people whose loved ones actually died in each of these ways. I got an email yesterday from Ricki Stern, the documentary filmmaker. She said, “When I was 6 years old, I was walking down the street in New York, eating a pink peppermint Baskin Robbins ice cream cone, and I saw an air conditioner fall on a man. It was just blood everywhere.”

Oh geez. Did she say what she felt when we see your dad being hit by a falling air conditioner?
Well, I was like, “How was watching the movie for you?” And she’s like, “It was great. I loved it.” She’s never been able to eat that flavor of ice cream again. But yeah, the reaction to the film has given me so many things. I have this wish to compile a death wish bible, so now I ask everyone who I talk to, “How do you wish to die?” Joe, how do you wish to die?

It’s funny because just being asked the question makes us confront the fact that it’s going to happen. I can only wish it’s without any pain. Maybe be vaporized? Wanting to feel no pain goes back to my experience watching my mom.
Your mother was in pain?

Yes. She had a high tolerance for it but in the end, it was too much. And that was a big thing for us. We said, regarding the pain killers, “She has to be out of pain.”
Did she want that, or did you all want that for her?

We did. But it meant that she lost her ability to communicate in the very last days.
Oh, the dilemma of that moment, right? Do we ensure that she’s in less pain? Or do we keep her able to communicate? What a horrible, difficult decision to have to make. I mean, this is why we avoid this stuff. It’s like, who wants to make a decision like that? So if you avoid it, you think you don’t have to make those decisions, maybe? But in fact, the person, their capacity and their agency shifts, and who is responsible? Who makes the choice? All of those things become question marks, right?

True.
I think this is what’s at the heart of my film in so many ways. And so bringing the film out into the world is processing that with people. Asking the questions of, “What do I do? What are we supposed to do?”

Have you compiled a list of the answers to that “how do you want to die” question?
Someone the other day said, “I want to die licked to death by puppies.” They can say anything, knowing that we can’t control it. But I mean, I think the thing that you’re saying, “without pain,” the problem is you don’t know what it is like to be your mother. You know what it is like to be her son, watching her in pain. And I think that’s the difference. When we shift into the role of the one who’s up next, then all bets are off. It’s like my dad in the film saying, “Yeah, you can go ahead and euthanize me, but pass it by me before you do, because I’m having a good time.”

How is your father doing now?
He’s down near my brother in Bethesda, and I’ve seen him about five times this year. But it’s a question of whether it’s a good thing to visit. Because he’s sobbing when I leave. So my heart’s ripped out. His heart’s ripped out. And when I don’t visit and call instead, he’s like, “Hey, nice of you to call. How’s it going?”

Kirsten Johnson and “Dick Johnson Is Dead” will also be featured in the upcoming documentary issue of TheWrap’s magazine.