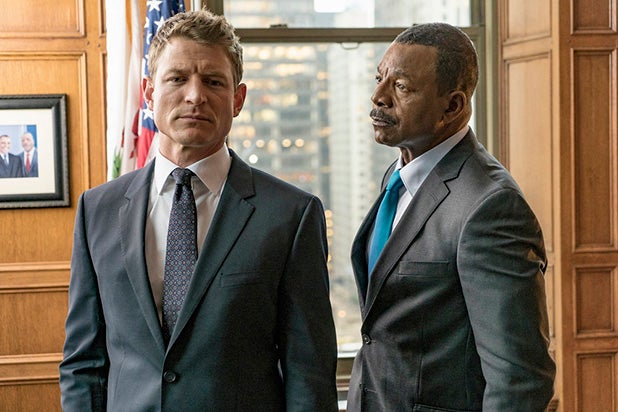 Show creator Dick Wolf made it clear that he doesn’t know the fate of his delated “Law & Order: SVU” episode about a Donald Trump-like character.

The episode, which stars “Veep’s” Gary Cole as a controversial political candidate embroiled in damaging accusations, was originally scheduled to air on Oct. 26, but was shelved ahead of the Nov. 8 presidential election.

“I suspect it’ll air in the spring,” Wolf continued. “But I don’t know.”

Wolf appeared at the press tour to preview “Chicago Justice,” the fourth installment of his prolific “Chicago” franchise, which will debut with an unprecedented four-way crossover event on March 1. The three-hour block of programming will consist of episodes of “Chicago Fire,” “Chicago Med” and “Chicago Justice,” featuring characters from “Chicago PD” throughout.

“It’s very challenging,” Wolf said. “But it’s a great story, and something that I think will keep people sitting there for all three hours.”

Also Read: Dick Wolf Wants SAG to Consider All His 'Chicago' Shows as One Ensemble

Wolf compared the shows’ use of crossover episodes to a drug addiction, saying that though the payoff can be incredible, they can sometimes be more trouble than they’re worth.

“The crossovers are a pain in the ass, everyone hates doing them,” Wolf said. “The highs for many of the shows have been during the crossovers, unfortunately it’s like ratings crack. And it’s a bad addiction because you don’t want to overuse it.”

“Chicago Justice” star Carl Weathers, on the other hand, said he enjoys visiting the other sets and getting the opportunity to act with the other casts.

“I kind of dig it, but also it’s kind of a new sandbox to play in,” Weathers said. “We really do have a great time on our set, [but] there’s just something cool about waking over to one of those other sets with people we don’t work with everyday and throwing down the gauntlet.”

“It makes me feel that our show is just that much better,” he said.