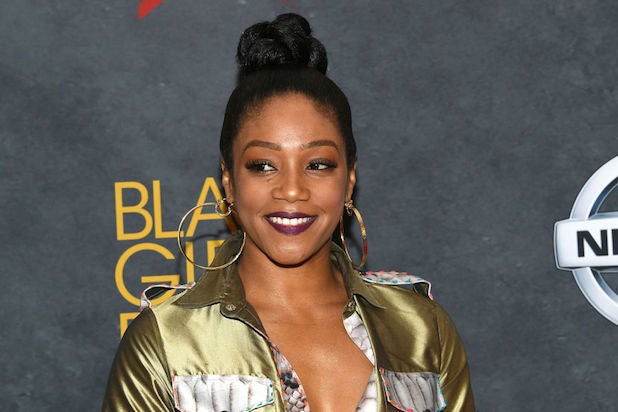 Tiffany Haddish’s “Girls Trip” may take her all the way to an Oscar, now that a Thursday honor has boosted her chances for gold.

Haddish was named best supporting actress by the New York Film Critics Circle for her turn in the Universal Pictures summer comedy — a performance with the kind of legs that got Melissa McCarthy an Oscar nomination for her breakout in 2012’s “Bridesmaids.”

“Tiffany Haddish’s performance in ‘Girls Trip’ was just as compelling as Melissa McCarthy in ‘Bridesmaids’ and Amy Schumer in ‘Trainwreck.’ It shouldn’t be ignored this awards season,” tweeted Tracy Oliver, who wrote the script for “Girls Trip,” after Haddish’s win.

Comedy actors have a notoriously hard time breaking out in a pack of dramatic performances, and when (godforbid) they get recognized it is usually for going straight. Think Eddie Murphy and his Jimmy Early in “Dreamgirls” or Bill Murray’s sullen and sweet drinker in “Lost in Translation.” McCarthy didn’t go the distance in 2012, by the way, losing to the pie-making talents of  Octavia Spencer in “The Help.”

What’s interesting about this year, however, is that the ground is plenty soft for supporting actress performances that pack a lot of levity. Frontrunner Holly Hunter is navigating a daughter in a coma in “The Big Sick,” but is easily one of the funniest parts of the Kumail Nanjiani vehicle produced by Judd Apatow.

Allison Janney plays an unloving, cast iron mother to figure skater Tonya Harding in the violent “I, Tonya,” but walks away with the entire film thanks to her deadpan line delivery — at the film’s Toronto premiere in September, the Princess of Wales theater erupted with laughs throughout.

Read some of the best reactions to Haddish’s upped-Oscar chances, and consider this a formal request to drop a praise and worship dance should she make it to the main stage at Dolby Theater in March.

.@TiffanyHaddish is in the MOTHER F*CKING HOUSE!!!!!!! #NYFCC
She's coming for you #Oscars! pic.twitter.com/KITuk1wRDM

Tiffany Haddish's performance in #GirlsTrip was just as compelling as Melissa McCarthy in Bridesmaids and Amy Schumer in Trainwreck. It shouldn't be ignored this awards season.

Everyone updating their supporting actress predictions to add in Tiffany Haddish pic.twitter.com/Oy6NfHESqd

When Tiffany Haddish is nominated for an Oscar, I hope she shows up to the awards in this Alexander McQueen gown https://t.co/CneFO08ybs pic.twitter.com/VVZwKhMsGC

Awards Season is open! Academy governor Steven Spielberg toasted the Governors Awards at Hollywood and Highland on Nov. 11 (seen here). It's just one highlight from TheWrap's tour of Hollywood hobnobbing as stars gear up for Golden Globes glamour and Oscar statuettes.