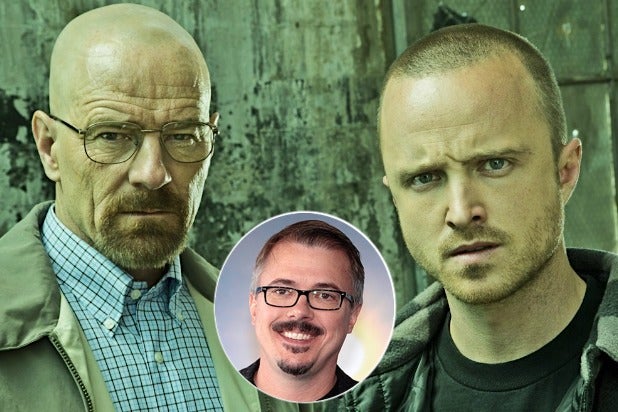 As of now, what little we know about Vince Gilligan’s planned “Breaking Bad” movie suggests it will focus on Walter White’s reluctant partner-in-crime, Jesse Pinkman. And Aaron Paul certainly sounds up for revisiting the role.

In November 2013, Gilligan surmised in an interview with GQ that Jesse’s troubles may not have ended with the show’s finale. The “Breaking Bad” creator said that while he personally hopes that Jesse found peace after the show, he believed the “most likely outcome” for Jesse won’t be good.

If you haven’t seen the “Breaking Bad” finale, go watch it (and the show’s 61 other episodes) before reading the paragraphs below.

First things first: Walter White is dead, as Bryan Cranston confirmed (yet again) on Tuesday. For the show to bring Walt back to life after leaving us with the impression in the finale that he was dead would be a cheat — and one reason “Breaking Bad” is so celebrated for its writing is that it never cheated.

And so we turn to Jesse Pinkman. The “Breaking Bad” finale also included Jesse escaping, with Walt’s help, from the compound where neo-Nazis forced Jesse to cook meth. We last saw Pinkman driving into the night, delirious with relief to be alive and free.

But what if he isn’t really free? That’s the dark prospect Gillian raised with GQ, and it may hint at a movie plot to come:

My personal feeling is that he got away. But the most likely thing, as negative as this sounds, is that they’re going to find this kid’s fingerprints all over this lab and they’re going to find him within a day or a week or a month. And he’s still going to be on the hook for the murder of two federal agents. But yeah, even though that’s the most likely outcome, the way I see it is that he got away and got to Alaska, changed his name, and had a new life. You want that for the kid. He deserves it.

The two federal agents Jesse may be “on the hook” for killing are Hank Schrader (Dean Norris) and Steven Gomez (Steven Michael Quezada), even though Jesse didn’t kill them — his neo-Nazi captors did.

Of course, Gilligan may have just been tossing around ideas. But it’s notable that after five seasons of the “Breaking Bad” spinoff “Better Call Saul,” Jesse’s ultimate fate still remains a mystery. And he is the only major “Breaking Bad” character who spent time in captivity on the show.

The wording that the “Breaking Bad” film will “track” the protagonist’s escape suggests that the film could overlap with the timeline of “Breaking Bad,” including the period of Jesse’s imprisonment.

The overlap would be no big deal for the “Breaking Bad” universe — both the original show and its spinoff, “Better Call Saul,” used flashbacks and flashforwards fairly often.

And if the film chooses to show Jesse’s captivity, it has a lot of time to explore.

The neo-Nazis held him for the entire time that Walter White was hiding out in New Hampshire. Walt was in New Hampshire for several months, as “Better Call Saul” show runner Peter Gould told the “Shoot This Now” podcast in August. You can on Apple or right here:

So how did Jesse spend all that time that he was trapped?

We know a bit about Jesse’s captivity, but certainly not everything. We saw that Todd Alquist (Jesse Plemons) kept Jesse locked up like a pet, albeit a pet who is really good at making meth.

Paul told “Shoot This Now” (which is not a “Breaking Bad” podcast, despite all these “Breaking Bad”-related interviews) that he hoped any return as Pinkman would be seamless. We spoke to him before news broke of the “Breaking Bad” movie, so he was only talking hypothetically about playing Jesse again, perhaps on “Better Call Saul.”

“I’d like to think it may be kind of easy and seamless to jump back into that guy because we live and breathe all of our characters that we play, and I played this guy for seven years,” Paul said. “I really know him. It’d be fun to put back on those shoes.”

Paul said people still come up to him on the street and call him Jesse — or Jesse’s favorite word, “Bitch.”

Paul said he often has to tell them: “My name is Aaron, really nice to meet you. It’s not Jesse. No, you can’t call me a bitch.”

We don’t expect that situation to improve much if Paul ends up starring in a “Breaking Bad” movie.

You can listen to Paul discuss the prospect of playing Jesse Pinkman again on Apple or right here:

Of course, Gilligan, Peter Gould and their writers have proven themselves very adept on “Better Call Saul” at making us care about the backstories of characters whose final fates we know from “Breaking Bad.”

“Breaking Bad” was the story of Walter White, with almost every moment based around his journey. It seems unlikely that he found time between meth and teaching and the car wash and his family to go live out an interesting B, C, or D story we’ve never heard of before.

Gilligan also noted in his GQ interview from five years that Walt died, in part, to save Jesse. So now the onus is on Jesse to lead a movie good enough for both of them.

A few “Better Call Saul” faces are familiar, but others are very deep pulls