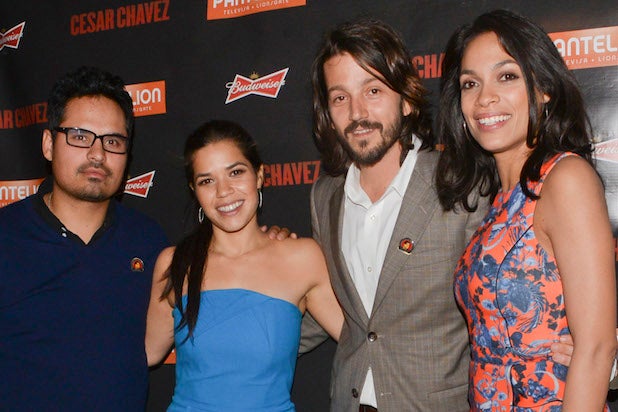 Diego Luna‘s biopic “Cesar Chavez” will screen at the White House on Wednesday night, the actor-director told The Wrap on Monday.

The film, which won the Audience Award at last week’s SXSW and premieres on Monday night in New York City, tells the story of the famed Mexican-American labor leader’s fight to unionize farm workers — he founded the United Farm Workers of America — and win better pay and conditions for the laborers picking grapes in the fields. Michael Peña plays Chavez in the movie, while America Ferrera plays his wife.

See video: President Obama and Zach Galifianakis Grill Each Other On ‘Between Two Ferns’

“The first thing would be ‘Please tweet about our film,’ because he has more followers than all of us together,” Luna joked, when asked what he’d tell President Obama should he get a moment with him. “But I really hope that this film raises awareness on the situation today in the fields. This struggle keeps happening. The struggle and fight of these people is still so much alive, and they deserve attention. Hopefully this film can draw attention, not just to farm workers but to all of those workers that today are feeding this country, that are building this country that deserve immigration reform.

“There’s more than 11 million workers today that are making America what it is and don’t share the same rights as those who are consuming the products or of those who are enjoying the fruits of their labor,” Luna added.

Rosario Dawson, who portrays Chavez ally and renowned labor leader Dolores Huerta, will also attend; Huerta, however, is too busy to make the trip.

“I love the fact that we tried to have Dolores come, but she had already scheduled to do something in California,” Dawson said, laughing. “And she tried to get out of it and cancel it, but she’s just so fabulous that she couldn’t, so she’s not going to come with us to the White House, which I think is amazing.”

The film, which was produced by Participant Media and is being distributed by Pantelion, already screened in DC, during an event on Capitol Hill in February.

“We screened in front of many representatives and people from organizations,” Luna said, “and it was interesting to be standing there, introducing the film, looking at all these faces and all these people that are today in key positions, and realizing that they’re there because of this movement, because of them.”

In 2010, President Obama proclaimed March 31st Cesar Chavez Day. Luna’s film, which is being produced by Participant Media and distributed by Pantelion,  opens in theaters on March 28.