Writer-producer-director Joe Carnahan first burst onto the scene in 1998 with his gritty indie debut feature, “Blood, Guts, Bullets, and Octane.” Shot in his spare time and then edited on borrowed equipment at night, his calling card was made on a budget of just $8,000. He followed that up with the well-received “Narc,” a Paramount release championed and executive produced by Tom Cruise, and another acclaimed feature, “Smokin’ Aces.” Now the former furniture-mover, freelance sports writer and TV trailer-cutter has directed Fox’s $100 million redo of the popular ‘80s TV action-comedy series “The A-Team.”

Carnahan talks about making the film and why his “Mission: Impossible III” with Tom Cruise crashed and burned.
Movies based on TV shows don’t seem to have a good track record…

I didn’t want to just transplant the TV show to the big screen. I thought that’d be a disaster because what worked 25 years ago ain’t gonna work now. It’d be like Chris Nolan rebooting Batman along the lines of the original campy series. 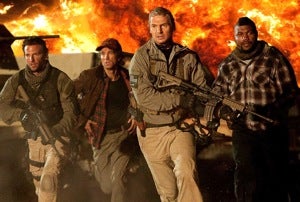 And I wasn’t a huge fan of the show as a kid, although I was a fan of the culture of the show. Everyone knew who the A-Team was, due to Stephen Cannell creating a really entertaining, fun show. So that was my point of departure. I wanted to keep the humor as much as possible, and make it very situational and not punchy, one-line gimmicky.
So it all came down to the script?
It was very tough getting it right — and we were still working on it further into the production than I was comfortable with. I come mainly from a writing background, so I like to have the script just right before I start shooting — but that also speaks to my limitations as a filmmaker, that I need to have the brick and mortar laid in advance so I know where to step and where to watch myself.
You come from a low-budget background. Any big surprises suddenly working on a $100 million project?
It’s funny, but no. There’s a tendency to be overwhelmed by the numbers — $100 million!! — but I was never in a warehouse where I saw all that money. So it’s not tangible or tactile, or something I could put my hands on and feel that grave sense of responsibility. Was it different from “Narc”? Of course. The catering was better. But in many ways “Narc” was more difficult, as I didn’t have the tremendous talent and support staff surrounding me. On some level you’ve got to be a real moron to not get through a situation like this with all the amazing people around you, and if you can’t make it work with them, you’re probably better off getting another gig.
Of course, we had our share of problems. We just didn’t have enough days for the shoot. We shot in Vancouver, because it’s cheaper there than going to Morocco and all the places we’d discussed for locations. We shot some second-unit location stuff, but it was down to the budget and what we had to pull off for the money.
Did you get the cast you wanted?
Absolutely! All four guys — Bradley Cooper, Liam Neeson, Sharlto Copley and Quinton Jackson — are perfect in the roles. Bradley brings a great sense of style to Face, and he really got into his M4 machine gun, and then Liam’s much more in line with what Cannell originally set out for with Hannibal, which was James Coburn and Lee Marvin. They were the model for that character, and Liam brings the gravitas. And “Rampage” Jackson and Sharlto nail their roles, too. Sharlto’s so smart and so keen.
There are lots of rumors that Mr. T will make a cameo.
I can’t tell you. I’m not at liberty to say. You’ll have to wait to see the movie.
If this does well, are you up for the sequel?
If the stars all realign, definitely. I had a great time with the guys, and I think they had a great time working with me, so we’ll see what happens.
You were all set to direct “Mission: Impossible III.” What went wrong?
A number of things, but the biggest one was the script. I felt we were in good shape with the script, but Tom [Cruise] had a different point of view and I wasn’t in a place where I was comfortable sucking it up and nodding my head “Yes.” I told him, "Look, it’s your franchise, it’s your name and face on the poster, you’re driving it and you’ve gotta do it the way you want it done." So it wasn’t going to work for me and I left probably a week before I was going to be shown the door (laughs).
It’s like a gunfight on the street, you just shoot the f—er in the back and that was the whole way that went down.
Are you still friends with Tom?
Oh, absolutely. It was all very gentlemanly and we patched things up. But listen, had I not had that experience, I don’t know that I would have been ready for this one, because I really learned a tremendous amount during my time on it. And I was on it for 15 months, man. I was out there for a long time. I spent five months in Europe and went out every night to great restaurants and walked and toured places. I know Berlin like the back of my hand, so I don’t have one regret about it.
And I owe Tom the biggest debt of gratitude. He took “Narc,” which could have ended up being this little obscure direct-to-DVD release, and gave it a big studio release and got it into 700 theaters and gave my career this huge boost. For that I’ll always be very grateful.
x
Looks like you're enjoying reading