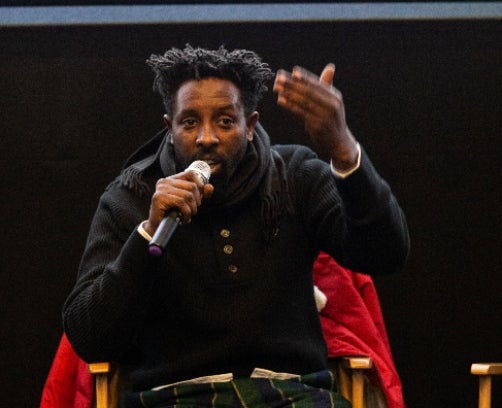 When French director Ladj Ly was 17 years old, he bought a camera and began to document interactions with the police in his neighborhood of Montfermeil in Paris, eventually capturing a real incident of police brutality that led to the suspension of the officers in question.

These experiences formed the basis for Ly’s first feature film “Les Misérables,” which won the Grand Jury Prize at the Cannes Film Festival in 2019 and has already earned a response from French president Emmanuel Macron himself.

“I want to tell about life there from the inside, without casting any judgement and without taking sides. As is clear, this is not an anti-cop film,” Ly said through an interpreter at a Q&A following a screening of the film in New York City on Monday night. “The goal here was to humanize every character, whether it’s the dealers, the religious figures, or the cops… these are not mere black and white figures.”

Also Read: Why the Algerian Government Doesn't Want You to See the Country's Oscar Entry 'Papicha'

Inspired by the 2005 riots against the police in the Paris suburbs, “Les Misérables” follows three members of an anti-crime brigade and their interactions with children and adults in the neighborhood over the course of a 24-hour period. The film stars Damien Bonnard, Alexis Manenti and Djibril Zonga.

All of the children in the film were cast from the neighborhood — including Ly’s son, playing a young boy who documents an altercation between the police and neighborhood boys with his drone– and none had professional acting experience.

Ly said that the film is intended as a “cry of warning” to French politicians to show them what life is really like in neighborhoods such as Montfermeil.

Also Read: 'And Then We Danced' Filmmaker Levan Akin on Russia's Protest of His Historic Gay Love Story

“I primarily wanted to bear witness to things, so everything you see on the screen happened to me or people who are close to me or inhabitants of the neighborhood,” he said. “This is a universal subject. Police brutality is a problem not just in France, not just in the United States… I think this is a great opportunity to talk about these problems and have the message be heard.”

The film has already been shown in more than 20 countries, including France and the United States, and Ly was even invited to see the film at the Élysée, France’s presidential residence — though he turned down the invitation and invited Macron to Montfermeil instead.

“Last week we read in the press that [Macron] had seen the film, and was incredibly moved by it and is trying to put measures to change things in these neighborhoods,” Ly said. “So we’ll see what happens.”