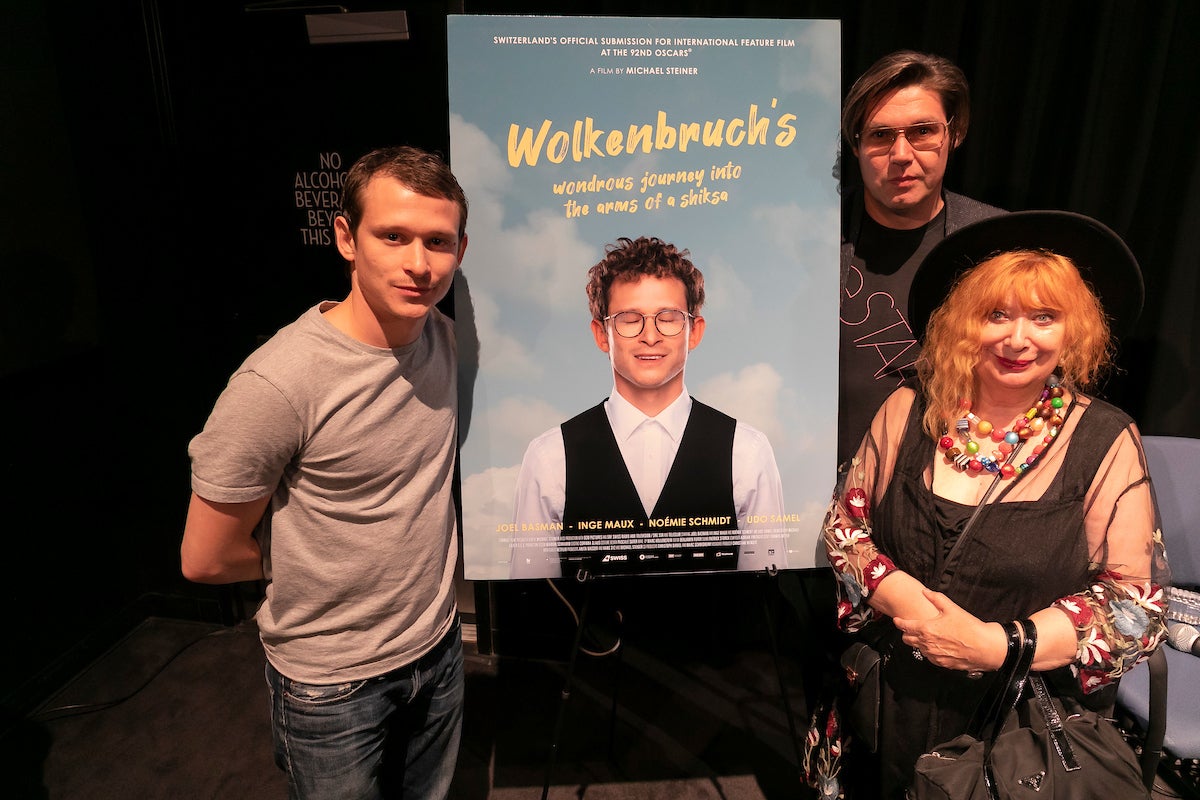 Wolkenbruchs Wondrous Journey Into The Arms of a Shiska Q &A with Michael Steiner, Joel Baseman, and Inge Maux hosted by The Wrap and held at the Landmark Theatre in Los Angeles.

In the 2010s, the use of fourth-wall breaking narration has become ubiquitous. From “House of Cards” to  “Fleabag” protagonists, speaking directly to the audience has become so popular that “Robot Chicken” has riffed on it. Now, “Wolkenbruch,” a Swiss romantic comedy now on Netflix, uses it to poke fun at a Jewish teen’s act of romantic rebellion.

Director Michael Steiner joined stars Joel Basman and Inge Maux at TheWrap’s Screening Series to discuss the new film, which has been selected as Switzerland’s entry into the Best International Film Oscar race. In the film, which has the full title “Wolkenbruch’s Wonderous Journey Into the Arms of a Shiksa,” Basman plays Motti Wolkenbruch, an awkward young Jew who is getting constantly set up for dates by his mother with women who, well, are practically clones of her. As he notes in a rapid-fire intro, the life of a Jewish man follows a strict road, from circumcision to Bar Mitzvah to arranged marriage to reproduction to death.

Also Read: 'Windows on the World' Star Edward James Olmos on Playing a 9/11 Survivor Without US Citizenship

But Motti yearns for his own path, and discovers it when he meets a shiksa — a non-Jewish girl — named Laura. She’s not only a shiksa…she’s a swearing, hard-partying shiksa. She’s such a dramatic change from the meek Jewish women Motti gets forced into meeting that he begins dating her despite knowing how his mother and community will react. But as he soon discovers, Laura is no manic pixie dream girl, and shiksas are not a ticket to freedom.

“Wolkenbruch” is based on a novel by Thomas Meyer, and Steiner decided that blending fourth-wall narration with flashbacks was the best way to make the traditions of Orthodox Jewish life quickly and easily understandable to all audiences. As Motti talks right into the camera, he is whisked from one stage of his past — or expected future — to another.

“There was a lot of information that had to be compressed down into a few minutes of screen time,” Steiner said. “Having that narration made it really easy to take Wolkenbruch’s life and convey it in a way that made it feel really universal even as we were explaining marriage traditions and what a shiksa is.”

Basman, meanwhile, is getting ready for a big next step in his acting career this winter. Along with “Wolkenbruch,” he also has roles in Terrence Malick’s latest film “A Hidden Life” as well as the third installment of the “Kingsmen” spy series, “The King’s Man.”

But “Wolkenbruch” is a passion project for him. His father, who was born in Israel, encouraged him to read the book and find a way to play Motti when he was a teen. When he reached out to find out if he could make a movie based on “Wolkenbruch,” he discovered that the film rights had already been taken. Years later, Steiner called him up to offer him that very role.

“I worked with Michael when I was 12 and did my first casting with him, so with ‘Wolkenbruch’ the circle sort of completed itself when he called me and told me ‘I have the script and want you to have the part, because you’re the only actor in Switzerland who speaks Hebrew and has Jewish relatives.'”

Basman also says that he’s seen firsthand how the strict life of the Hasidic community can give some cabin fever. He recalled one former Hasidic Jew that he met prior to filming “Wolkenbruch” who after leaving the community flung himself into as many action-packed hobbies and jobs as he could.

“He started playing every sport he could try. He took up a job for a few months as a bartender, and then he took up a job as a firefighter. He was trying out everything and just filling up his life with hobbies.”

As for Maux, playing Motti’s mother came very naturally to her. While not as high-strung and overbearing as her character, Maux was quite familiar with many of the Yiddish songs that Mame Wolkenbruch belts out over the course of the film. She also had a very strong mother and grandmother that inspired her performance, and to her delight she was pleased to see how many people from around the world have had their own Mame in their life.

“I’ve gone onto social media, onto the page for the film,” she said, “And I’m so amazed by how many people have responded to the film and where they come from. It’s not just Switzerland and Israel. It’s England and France and other places in Europe, and now we’re here in Los Angeles promoting the film this week and it resonates with people here too. I’m just so grateful to be a part of something and have a role that so many can see themselves and their families in.”