"Blessed by angels," is how director Lee Daniels describes his new movie, "Precious: Based on the Novel ‘Push’ by Sapphire."

How else, the director reasoned, would a film centered on an obese black girl living in the ghetto have achieved such critical acclaim, let alone find financial backing and theatrical distribution.

"When I make movies, I anticipate they’re going to go direct-to-DVD," Daniels told the crowd at a special screening of "Precious" hosted by The Wrap Tuesday night at the ArcLight in Sherman Oaks. "I assume no studio will embrace the intelligence of the audience." 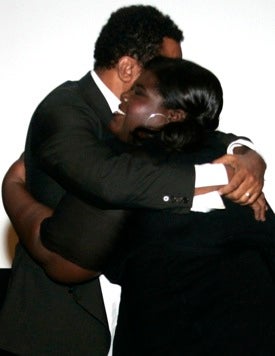 (See slideshow of the event.)

But the near-capacity audience clearly embraced Daniels’ bleak depiction of incest, illiteracy and child abuse, giving the film a standing ovation and breaking into enthusiastic applause when the director and Gabourey Sidibe, the film’s star, were introduced.

The showing was the first in a series of screenings of critically acclaimed films that TheWrap is sponsoring for registered readers and Academy and guild members throughout this awards season.

The wide-ranging discussion was moderated by Sharon Waxman, the site’s CEO and founder, and touched upon Daniels’ personal experiences with the material and challenges getting the film made outside the studio system.

Daniels said that he was inspired to tell the story of Claireece “Precious” Jones (Sidibe), a 16-year-old African-American girl pregnant for the second time by her absent father and physically and emotionally abused by her mother (Mo’Nique), because of his own childhood experience witnessing the effects of domestic violence.

"I was 11 years and my best friend, a girl named Angie, came to our front door on a Saturday afternoon," Daniels recalled. "She was bleeding, but she had covered herself as best as she could. She said, ‘My mom is going to kill me.’ I remember my own mother was afraid, and I saw fear in her eyes for the first time. Years later, I read ‘Push,’ and it evoked all those feelings."

"I felt if I did this movie maybe Angie, wherever she is, would heal."

Though dark, Precious’ tale does take a hopeful turn after she transfers to an alternative school, where she benefits from the attention of a devoted teacher (Paula Patton).

Daniels said finding the moments of levity in the depressing story were key.

"We joked, we laughed, we ate fried chicken. It was a party on the set as soon as we yelled wrap," he said. "I refused to take the movie too seriously, because I felt if I did, I’d lose the audience." 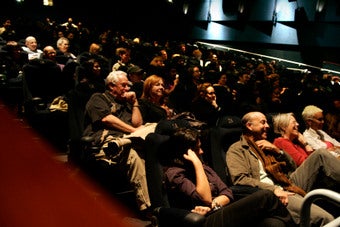 Equally crucial to the success of the film was finding an actress capable of embodying the complex central character.

Daniels told the audience that he auditioned over 400 girls trying to find his Precious. In addition to casting calls, he scoured McDonald’s and 7-Eleven trying to find someone who resembled the downtrodden protagonist.

Ultimately, he said he was on the wrong track; he needed to find someone who could essay the role without necessarily sharing Precious’ baggage. He was attracted to the articulate, effervescent Sidibe because she was the polar opposite of Precious.

Sidibe agreed with Daniels she is vastly different from her character, but said she felt she could play the role because it was a personality type she had encountered before.

"I knew her in friends, in family, in people I didn’t want to know," Sidibe said. "Precious is not just a girl, she’s a boy, too. She’s not just black, she’s white, she’s Asian."

In addition to praising Sidibe, Waxman asked Daniels how he had been able to get such a searing performance out of Mo’Nique, a bawdy comedian not known for her dramatic roles.

"I think comedians have a third eye," Daniels said, recalling Richard Pryor’s performance in "Lady Sings the Blues" as a dramatic break from type that left an impression on him as a young moviegoer.

But casting Mo’Nique had risks, as he acknowledged.

"I knew she was the queen of BET," Daniels said. "I said, ‘Mo, I know you’re right for this, but you’ll lose your audience.’ African-American women are the pillars of their society, so I knew they’d freak. As a friend, I didn’t want her to do it, but as a director, I wanted her badly."

Mo’Nique undeniably is asked to go to some dark places throughout the course of the movie — throwing frying pans, hurling invective and even tossing her baby grandchild to the ground in one particularly harrowing scene. Finding a way to explain without justifying her behavior was important to Daniels.

The director cited a lengthy monologue toward the end of the movie as a critical moment in the character’s arc.

"I thought that it was important that I wouldn’t sympathize with her, but I’d understand why she did what she did, because these are atrocities," Daniels said.

As for Sidibe, currently the focus of some serious Oscar buzz, the novice actress said she has just wrapped her second film with Zoe Kravitz, daughter of her "Precious" co-star Lenny Kravitz, and plans to continue acting. The former psychology student acknowledged, however, that she still carried some guilt about not finishing her degree.

"I think I realized that [acting] is part of my purpose," she said. "With this film, I can reach so many more people than I could as a therapist."

Among the eight films included in The Wrap’s screening series are Rob Marshall’s "Nine," Kathryn Bigelow’s "The Hurt Locker" and Tom Ford’s "A Single Man." Next up is Neil Blomkamp’s "District 9" on Nov. 12.