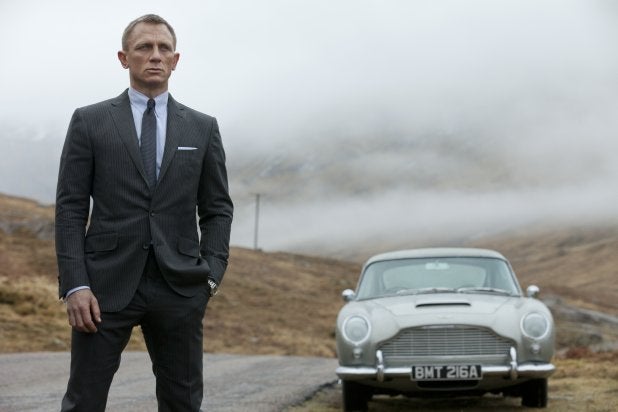 The next James Bond film will be called “Spectre.”

Daniel Craig returns as Bond, with Sam Mendes back to direct. The “Skyfall” writing team of John Logan, Neal Purvis and Robert Wade, has also been tapped to return.

Mendes made the highly-anticipated announcements of the film’s name and cast via a live online video stream Thursday morning.

Aston Martin was once again brought on board to provide James Bond’s ride, which will be the new Aston Martin DB10, which director Sam Mendes revealed live.

New cast members include Andrew Scott as Denby, “a new addition to the Whitehall family,” as Mendes described him. David Bautista was then introduced as Mr. Hinx, followed by the film’s two Bond ladies: Monica Bellucci as Lucia Sciarra, and Lea Seydoux as Madeleine Swan. Finally, Christoph Waltz was introduced, while his character in the film was not identified, he is widely expected to be the film’s villain.

Also read: Denzel Washington Wants to Be the Next James Bond: 5 More Things ‘The Equalizer’ Revealed on Reddit

Eon Productions, Sony Pictures Entertainment, and Metro-Goldwyn Mayer Studios jointly announced the name and final cast for the 24th official film in the James Bond mega-franchise at the press conference Thursday, which was broadcast via a live stream from the 007 Stage at Pinewood Studios in London at 6 a.m. ET.

Principal photography on the latest James Bond adventure is scheduled to begin Monday, Dec. 8 with an eye on a release date of Nov. 6, 2015 in the U.S. The U.K. release date is slightly earlier, on Oct. 25.