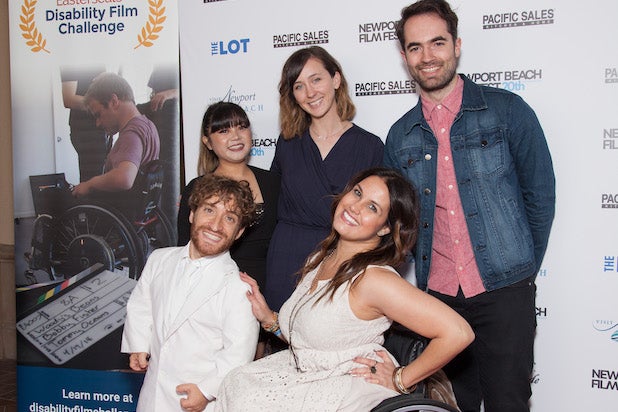 In the short film “Take It Back,” a woman in a wheelchair travels back in time with the intent of warning her younger self about a car accident that left her unable to walk. But on her journey through her youth, she realizes it’s the other memories that define the person she’s become, not her disability, and she chooses not to change her past.

“Take It Back” is one of five shorts nominated for Best Film as part of the Easterseals Disability Film Challenge, an annual competition in which filmmakers, storytellers and actors with disabilities come together to make movies that highlight stories about disabilities and provide opportunities for disabled actors.

RJ Mitte, one of the stars of “Breaking Bad” who lives with cerebral palsy, is a judge for the film challenge, and he singled out “Take It Back” as a movie designed to change the perspective of how someone with a disability is viewed.

“We have a tendency to dwell on our faults and not always show our full strength,” Mitte told TheWrap. “Sometimes it brings out ‘lack of ability’ or that ‘liability.’ That’s not the case. We want to highlight and remind people that just because someone has a disability does not make them a liability.”

Nic Novicki is an actor and little person who founded the film challenge in 2014. When he started, as few as six films were submitted, and that number has now ballooned to 71 entrants in 2019. Many have crews in which up to 90%  of participants have disabities. For Novicki, the festival’s goal has always been to create a venue for underrepresented stories, and to open paths into the film industry.

“The goal with the challenge is ultimately about inclusion,” Novicki said. “You’ll have someone with Down syndrome, a little person, someone in a wheelchair, and the goal is to get those people to continue to collaborate beyond the film challenge.”

Participants had 48 hours to make a film between three and five minutes in length that demonstrated a “natural inclusion” of disabilities either in front of or behind the camera. The films didn’t have to exclusively tell a story about living with disabilities.

“You don’t have to make it about the disability, but have that person in the background. Have that person part of that world and not just have them as the main focal point of their disability, but just have them living in that world,” Mitte said. “We see strides, but we see a lot of reluctance on, ‘Why would I do that? Why would that make sense?’ It’s such a big part of our community, and people forget that. That’s why we have to continue to highlight films. These individuals are out there. They’re hungry. They want the work, they have the ability to do the work, so why aren’t you giving them the ability to do the work? That’s what we’re cultivating.”

Winners at this year’s challenge will get to sit down with “The Lego Movie” director Phil Lord and SK Global president John Penotti as industry mentors. Others, like Peter Farrelly and Marcia Gay Harden, have previously helped connect the challenge’s participants with jobs.

“The Easterseals Disability Film Challenge gives people that leg up or that advantage because they’re getting seen now by these giant casting directors,” Novicki said. “The reason why people with disabilities are not getting written in is that sometimes the writers don’t have a personal connection to disability, and it’s just not on top of [their] mind.”

It’s important for below-the-line crew members, as well. Mitte said he recently worked on a feature film in which 75% of the people on set had a disability, and he noticed no difference between that and any other Hollywood production he’s worked on.

“There were no hiccups, no follies, and that’s what we have to show more of,” Mitte said. “These individuals aren’t burdens on the set. They’re professional. They’re working professionals. They just happen to have a disability. It does not define what they are in the industry or what they can do.”

“Take It Back” is just one of the many films submitted as part of this year’s competition that frames the conversation around disabled inclusion in a positive light. And Mitte says that this film is a great example of why such stories are so important.

“She learns to embrace herself. She learned it wasn’t her disability that defined her life. It was the lack of living her life and willingness to put herself out there. That ability was always there,” Mitte said of the film’s protagonist. “Finding that well-being and happiness is not always just because I have a disability. It comes from so much more. That’s one facet, but there are so many more things that define and create who you are as an individual.”

The Easterseals Disability Challenge will unveil its awards winners on May 9 as part of a red carpet ceremony at Sony Pictures. All 71 of the submitted films can be viewed on Easterseals’ YouTube channel.

Below, find the full list of finalists as part of this year’s film challenge. To view it, click on the title.