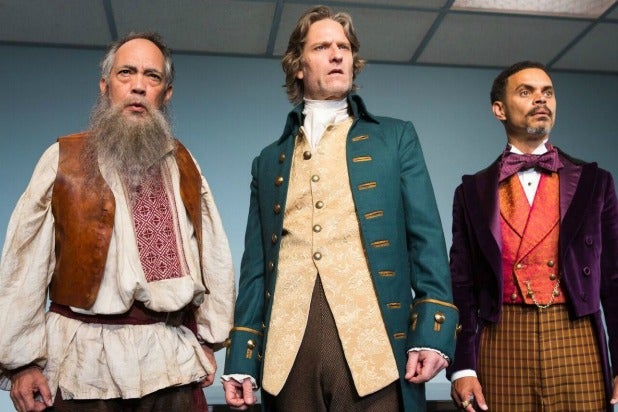 One can only imagine what Bill Maher and Scott Carter, his longtime executive producer-writer, talk about when the subject of religion comes up. For his first full-length play, the honcho behind “Real Time With Bill Maher” ruminates on the afterlife without God in “The Gospel According to Thomas Jefferson, Charles Dickens and Count Leo Tolstoy: Discord,” which opened Sunday under the auspices of Primary Stages at the Cherry Lane Theatre.

Carter has structured “Discord” around not one but three stabs at writing the gospel. Who knew that Jefferson, Dickens and Tolstoy each wrote a gospel, and as they belatedly discover, it’s the reason why they’ve all been stuck in a “no exit” room upon dying, even though their respective deaths span nearly a century.

Carter, obviously, has used his encyclopedic knowledge of Jefferson, Dickens and Tolstoy’s lives and written works to have his characters beat up on each other with erudite, dizzyingly delightful jabs. When they exhaust trashing their respective careers, Carter has them go after other major figures in literature. As Tolstoy claims to have told Anton Chekhov on his deathbed, “I hate Shakespeare’s play, but yours are even worse.”

Carter quickly establishes who each of these three geniuses are by exposing a fatal flaw: Dickens’s overwearing pride, Tolstoy’s bottomless despair, Jefferson’s humblebrag. Thom Sesma is so spot-on as Tolstoy that he could be the real thing, for all I know. Duane Boutte as Dickens appears to be channeling Ben Kingsley, an eccentric approach to the role that makes the character even more pretentious than written. Only Michael Laurence’s rather bland Jefferson tends to fade between the verbal thunder of the other two roommates. Under Kimberly Senior’s astute direction, however, there’s method in having an American founding father register as a bore.

According to Carter, only Dickens’ gospel resembles anything you’d find in the Bible. A rather schmaltzy retelling of the Christ story, the gospel titled “Fancy” is what you’d expect from the man who gave us “A Christmas Carol.”

Jefferson’s gospel is titled “A Teeth-Gnashing Hell,” and just when it begins to live up to its name, Dickens jumps in to jazz up the prose with some cliffhangers and melodramatic twists of plot. The erstwhile president, of course, objects. “Miracles insult God’s perfect design,” says the world’s ultimate rationalist.

Tolstoy bases his gospel, “The Secret of Life,” on a study of Christ’s own words, and it is here that Carter gets to roast nearly every Christian tenet, since most of them were dreamed up hundreds of years after the life of Christ.

It’s a truly blessed thing that there are only three gospels and not four or five. Egomaniacs that they are, the men of “Discord” force each other to confront the hypocrisy at the core of their lives. It’s here that the symmetry of Carter’s play is thrown off more than a little. Dickens and Tolstoy were horrible husbands and fathers, but Jefferson was a major slaveholder. In Carter’s vision of hell, it’s not difficult to tell who occupies the ninth circle.

Carter lets Tolstoy, Dickens and Jefferson come to terms with the ultimate existential predicament in ways that one might expect of three writers. It’s not the most satisfying last scene for a play, but that’s life. Or the end of it.