That number encompasses Discovery’s entire portfolio, including international direct-to-consumer products, like Eurosport Player and GolfTV. But according to Discovery, the majority of the 20 million figure comes from Discovery+, though the company did not provide a specific breakdown.

Discovery reported that it ended Q2 with 17 million paying direct-to-consumer subscribers and had reached a cross-portfolio 18 million as of Aug. 3.

“We made great strides in the quarter operationally, financially and creatively,” Discovery’s president and chief executive officer, David Zaslav, said in a statement prepared to accompany the third-quarter earnings results Wednesday. “The team drove solid momentum in our direct-to-consumer business, which we grew to 20 million paid subscribers at quarter end on the strength of our global brands and fan-favorite content, including the Summer Olympic Games and Shark Week. Additionally, we delivered double-digit growth in both advertising and distribution revenues, as we doubled next generation revenues year over year. This strong performance once again drove very healthy cash flows during the quarter, further strengthening our balance sheet and financial profile. We are very excited about our pending merger with WarnerMedia and the opportunity to bring these two companies together, combining iconic and globally cherished franchises and brands, and positioning us to more efficiently drive global scale across the combined portfolio.”

Discovery’s streaming platform had “the largest-ever content offering of any new streaming service” at its January launch, per Discovery, including more than 50 original titles and over 150 hours of exclusive content,” like the preview of Chip and Joanna Gaines’ Magnolia Network, which launched in full on July 15. 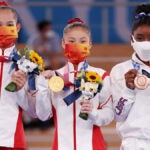 Soon, Discovery will be the owner of another streaming service, HBO Max, as the company is set to acquire WarnerMedia from AT&T. That will give Discovery plenty more built-in customers, with HBO and HBO Max currently boasting a combined 47 million U.S. subscribers and 69 million global customers, per AT&T’s third-quarter earnings results, which were revealed Oct. 21.

Zaslav will run the newly combined WarnerMedia and Discovery company, which will be called Warner Bros. Discovery, after the deal passes regulatory hurdles and eventually closes. The current prediction from AT&T is that closing will occur in mid-2022.

Discovery, Inc. reported its Q3 earnings results Wednesday morning. You can read more about those here.