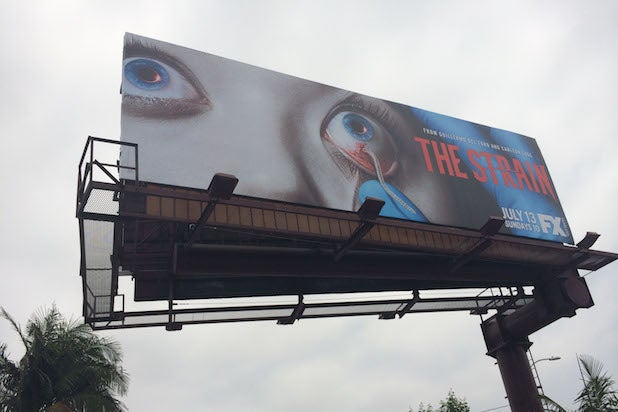 FX’s billboards for “The Strain,” featuring a worm popping out of an eye, are grossing people out.

“Hey, ‘The Strain’ billboards: f— you! People have little kids in this city who don’t want to be scared out of their goddamn minds!” wrote “Forgetting Sarah Marshall” director and “The Muppets” writer Nicholas Stoller on Twitter, speaking for many.

See photos: ”The Strain’ Billboard Freakout: How Gross Is the Vampire Drama?

FX declined to comment on the campaign for Guillermo Del Toro‘s new horror series, which premieres on July 13. But if the maxim that there’s no such thing as bad publicity is true, the network is getting plenty of not-bad publicity on Twitter, where drivers have vented their revulsion at the image.

The ads haven’t just offended kindhearted “Muppets” writers. Molly Ephraim, star of the very frightening “Paranormal Activity 2,” has mounted a mini-Twitter campaign against the billboards in her Los Angeles neighborhood.

“Billboard for ‘The Strain’ or whatever that godforsaken thing is w/ the thing in the eyeball on my street; can I call the Mayor to complain?” she wrote Tuesday. She followed up Tuesday with “NO BUT SERIOUSLY I CAN’T DEAL WITH THOSE POSTERS FOR “THE STRAIN” I NEED THEM REMOVED CITYWIDE.

But here’s the thing about horror: We say we hate it, we don’t want to see it, make it go away… and then we have to watch.

Good news for masochists: The billboards may be the least gross thing about “The Strain.” The show, about a doctor (Corey Stoll) leading an investigation into an outbreak of vampirism, features creatures with atrophied sex organs who plunge stingers into human flesh.

Neither are the billboards. Here are some more Twitter responses to the horror: