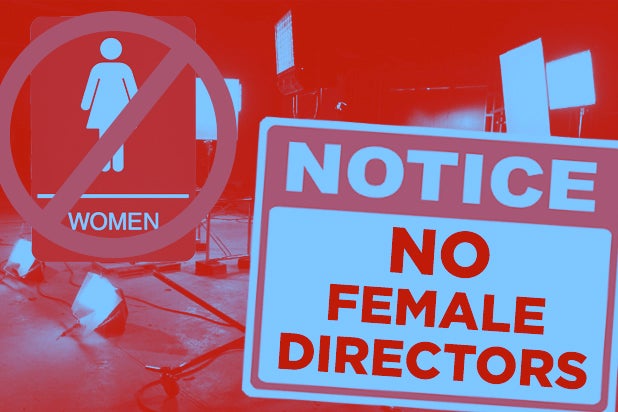 Only 6 percent of the movies slated for wide release this year from the six major Hollywood studios are directed by women, a drop from the last two years, according to a survey conducted by TheWrap.

In addition, two of the six major studios — Disney and 20th Century Fox — have no movies on their 2017 release slates directed by women.

And the prospects beyond this year are not much better. Of the 149 movies currently slated for a wide release from the six legacy studios over the next three years, only 12 have female directors. That means a whopping 92 percent of the major motion pictures due in theaters through the end of 2019 will be helmed by men.

Reps for Disney, Fox, Sony and Universal declined to comment but did not dispute the figures on their release slates. Paramount and Warner Bros. did not respond to repeated requests for comment.

“After looking at the movies, there is really not a lot of progress,” Melissa Silverstein, founder and publisher of Women and Hollywood, told TheWrap. “In 2017, there are five to six women directors, 2018 looks even smaller and who knows what happens in the future but we still see how Hollywood studios aren’t trusting women to direct movies at the highest level with big budgets and a wide release. There is no other way to look at it — they’re not hiring women. Women are not getting the opportunities.” 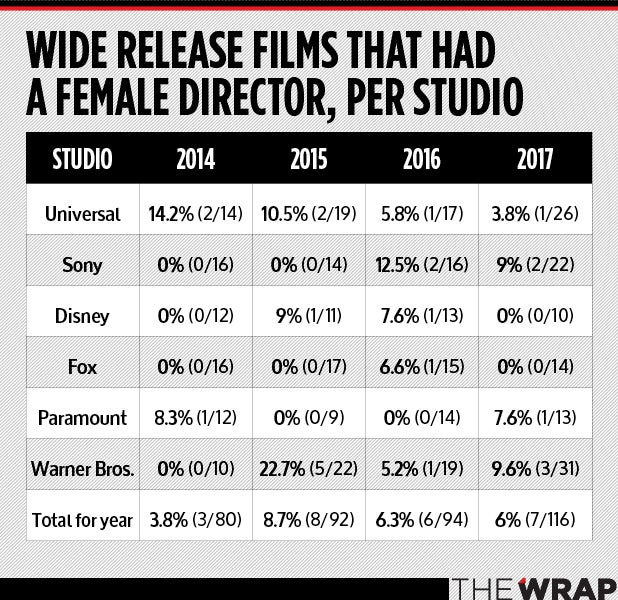 From 2014 to 2016, 17 of the 266 films released by the six major studios had female directors — for a rate of 6.3 percent, compared to 8 percent for 2017 and onward. But neither the raw number of female directors nor the percentage has managed to crack into double digits despite renewed focus on gender disparity in the industry.

The call for more women filmmakers in the Hollywood studio system has reached the mainstream in the last couple years. That is partly due to viral campaigns like #OscarsSoWhite, but also because of a lawsuit by the EEOC against major Hollywood studios claiming that they systemically discriminated against female directors.

For this survey, TheWrap did not consider releases from art-house divisions like Fox Searchlight and Sony Pictures Classics, which typically rely on acquisitions as opposed to developing projects in-house and hiring the filmmakers involved.

Here’s a breakdown of the gender disparity for directors, by studio.

In TheWrap’s survey of upcoming studio releases, the biggest surprise may be Fox — where Stacey Snider has served as chairman or co-chairman since 2014.

Aside from Jennifer Yuh Nelson and Alessandro Carloni’s “Kung Fu Panda 3,” the DreamWorks Animation hit which Fox distributed last year as part of an output deal, the main Fox studio has not released a single movie with a female director since Elizabeth Allen Rosenbaum’s “Ramona and Beezus” in 2010.

There are two women on the studio’s upcoming slate: Ryan Case, a TV veteran who has been hired to direct the comedy “Fire Me,” and Emily Carmichael, who will direct an adaptation of the comic book series “Lumberjanes.” Neither has announced casting or set a release date. In addition, the studio started a fellowship for female directors with AFI last fall.

For the purposes of this survey, TheWrap did not Fox Searchlight, whose more female-friendly slate includes Amma Asante’s just-released “A United Kingdom” and Valerie Faris and Jonathan Dayton’s fact-based sports comedy “Battle of the Sexes,” due in May. And next year, Searchlight will release “Can You Ever Forgive Me?,” a dramedy directed by Marielle Heller and co-written by Nicole Holofcener. That project is currently in production.

Here is Fox’s slate for the next two years:

While Disney has no female directors releasing movies in 2017, the studio has a smaller release slate than most major studios and has made the biggest commitment to including women in its blockbuster plans beyond this year.

Ava DuVernay, who burst onto the scene with 2014’s “Selma,” is currently shooting Disney’s 2018 adaptation of “A Wrinkle in Time.” Niki Caro (“McFarland USA”) will direct next year’s live-action remake of “Mulan.” And Disney’s Marvel Studios is expected to hire a still-unnamed woman for the upcoming “Captain Marvel” starring Brie Larson.

On the animated side, Meg LeFauve will co-direct the Jack and the Beanstalk remix “Gigantic,” which is also slated for a 2018 release, and “Frozen” co-director Jennifer Lee is expected to return for the highly anticipated sequel to the hit 2013 movie. “Frozen 2” was first announced back in 2015 and is currently in development, but no release date has been set.

Of all the major studios, Warner Bros. has the next big female-fronted project this year: Patty Jenkins’ “Wonder Woman,” due June 2.

Along with DuVernay, Caro, and Kathryn Bigelow, Jenkins is now one of only four women to solo direct a live-action film with a budget of more than $100 million.

Warner Bros. is releasing two other projects this year directed by women, Denise Di Novi’s “Unforgettable” and Stella Meghie’s “Everything, Everything” (the latter is a co-production with MGM). But no female director for any project that has been dated for release in 2018 or 2019.

That said, Warner’s New Line label recently hired “Straight Outta Compton” co-writer Andrea Berloff to direct an adaptation of “The Kitchen,” Vertigo’s comic book miniseries about the wives of Irish mobsters who take over when their husbands are arrested. The film has not gone into production or received a release date.

Also Read: Every 2017 Studio Movie With a Female Director, From 'Wonder Woman' to 'Pitch Perfect 3' (Photos)

Paramount, which traditionally has a much smaller output than the other major studios, last had a wide release from a woman director in 2014: Ava Duvernay’s acclaimed historical drama “Selma.”

This year’s slate includes just one woman, Bonni Cohen, who shares directing credit with Jon Shenk on the follow-up documentary to Al Gore’s “An Inconvenient Truth.” The film was an acquisition out of Sundance in January so the studio had no hand in hiring Cohen and is unlikely to give the film a very wide release come July 28. (Its Oscar-winning predecessor was never on more than 587 screens in 2006.)

Aside from that, Paramount still has no female directors for major feature films on a slate that includes sequels to “Mission: Impossible,” “Transformers” and “Spongebob Squarepants.”

Universal has only one woman on its 2017 directors’ list: Trish Sie, who took over “Pitch Perfect 3” after the second installment’s director-star Elizabeth Banks dropped out.

The studio has only one other female-directed movie booked in the next three years — Kay Cannon’s “The Pact,” due in 2018. That’s 8.7 percent of its announced slate.

But fully one third of the 2017 releases from Universal’s indie division, Focus Features, are by women. That includes Niki Caro’s drama “The Zookeeper’s Wife,” due March 31, and Sofia Coppola’s Civil War-set “The Beguiled,” out June 23.

Sony has two 2017 films with female directors: Anna Foerster’s “Underworld: Blood Wars,” which was released in January through Screen Gems, Lucia Aniello’s comedy “Rough Night,” which is due in theaters in June.

Both “The Nightingale” and “Charlie’s Angels” have no release date yet but have Michelle MacLaren and Elizabeth Banks, respectively, attached in the director’s chair.

TheWrap did not include releases from Sony Pictures Classics, since the art-house division depends mostly on acquisitions. But SPC has at least two 2017 releases helmed by women: Eleanor Coppola’s “Paris Can Wait” and Aisling Walsh’s “Maudie.”

Still, just one out of 22 movies on Sony’s upcoming slate has a female director attached — meaning 4.5 percent of all slated movies will be directed by a woman in the next three years.

For the record: A previous version of this story did not include the upcoming Fox project “Fire Me,” with director Ryan Case.