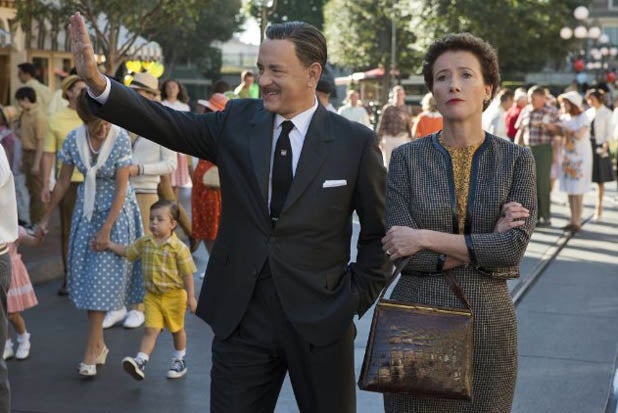 Disney production president Sean Bailey had heard every pitch in the book for a movie about his company’s namesake — but none of them interested him. This despite Walt Disney’s storied life as pioneering animator, Mickey Mouse creator and South American explorer.

“We had never really entertained or thought about making a movie about Walt Disney before,” Bailey told TheWrap.

That all changed when a vice president at the studio called Bailey at his home in the fall of 2011 and said his boss needed to drop whatever he was doing and read a script.

“He said ‘Number one, it’s very good and out in the world, and number two, one of its protagonists is Walt Disney,'” Bailey recalled.

Also read: Director John Lee Hancock on ‘Saving Mr. Banks': We Went for the Truth, Not the Facts

Disney debated buying the script to bury it under “Mr. Toad’s Wild Ride.” If Disney was not going to make it, the studio had to prevent any competitors from telling a story about their company’s founder and namesake in a way they could not control. Disney, an avuncular presence on the company’s TV early shows, has in more recent years come under fire for his politics.

“We’d never depicted him,” Bailey said. “But to the leadership of the company’s credit, they said, if you feel good go for it.”

That decision resulted in “Saving Mr. Banks,” a film that features Tom Hanks as Walt — never Mr. Disney — and opens nationwide Friday after a limited debut last weekend. Though Disney is a central character in the film, he takes a back seat to P.L. Travers.

Travers wrote “Mary Poppins,” an iconic book inspired by her difficult youth in Australia. As popular as her book has been over the past half-century, very few knew the tale of its author — not even Richard Sherman, the songwriter who spent weeks battling with Travers over the film.

Neither did Ian Collie, a producer and executive at the Australia-based Essential Media and Entertainment. Collie was in a bookstore when he stumbled upon a copy of “Mary Poppins” and discovered Travers was Australian on the backfold.

That inspired Essential, a top producer of documentaries and TV shows in Australia, to make a documentary about Travers titled ‘The Shadow of ‘Mary Poppins.'”

“From making the doc I could see there’s an obvious biopic there,” Collie told TheWrap. “I’ve always had a fascination with writers and creators.”

Collie included some dramatic reenactments in the documentary, casting his own daughter as a young Pamela Travers.

Essential then approached Sue Smith, a well-known writer in Australia, about drafting a script for a new feature. Three drafts later, the tale followed Travers’ own sojourn across the globe, to the BBC and the desk of Ruby Films’ Alison Owen in London.

Owen, producer of “Elizabeth” and “Shaun of the Dead,” brought in Marcel, a relatively unproven screenwriter at the time who would later be hired to adapt “50 Shades of Grey.” Marcel rewrote the script, eliminating a storyline about Travers and her son.

Marcel’s script offered a two-part narrative — one focused on Travers’ youth, the other on her lengthy battle with Disney over the film rights to her beloved Mary.

“There was always that elephant in the room, which is Disney,” Collie told TheWrap. “We knew Walt Disney was a key character in the film and we wanted to use quite a bit of the music. We knew we’d eventually have to show Disney.”

Working with Disney was a dream since only the studio could offer the rights to the music.

“We didn’t know if they’d finance it, but we wanted to be sure we could get the rights,” Collie said.

They embraced it. “And they threw money at it,” Essential CEO Chris Hilton joked.

Disney also offered troves of letters that informed Marcel’s script, revealing far greater detail about the interaction between Travers, Disney, the Sherman Brothers and others.

For Disney, the biggest concern was the depiction of Disney. Marcel told Slashfilm the studio “specifically didn’t want to come in and sanitize it or change Walt in any way.”

Director John Lee Hancock suggested to TheWrap that the movie’s development outside of the studio actually helped in that regard.

“The second thing was, if this were a biopic about Walt Disney, there would be so much more added pressure, because there are so many people in both camps that feel one way or the other about Disney,” he acknowledged.

Though “Saving Mr. Banks” promotes the same positive messages as most Disney movies, the film is neither saccharine nor hagiographic – schmaltzy music aside.

At the recent Los Angeles premiere, several attendees expressed surprise about a few scenes they considered “not very Disney,” such as those depicting the alcoholism of Travers’ father (played by Colin Farrell) and the near-suicide of Travers’ mother.

Bailey said the movie had all the hallmarks of a Disney movie in telling a story about families and creativity. Yet what made this script stand out — and has landed this movie in the awards conversation — is a little flexibility with the characters, from Emma Thompson‘s unlikeable Travers to Disney himself.

Disney was a big drinker and smoker, and Hancock tap danced his way through those issues. Hanks’ version drinks a few tumblers of whiskey, and puts out a cigarette moments before Travers bursts into this office — nearly violating Alan Horn’s promise that characters won’t smoke in Disney movies.

“Obviously you want to come away from the movie liking him,” Bailey said. “But if it were too sugarcoated, it would be a mistake.”

For the record: An earlier version of this story said the film appeared on The Black List before Disney bought it. It was voted one of Hollywood’s favorite unproduced screenplays after Disney acquired it.