When you wish upon a star, you just might get the first teaser trailer for Disney’s live action “Pinocchio.” But you won’t get a look at Pinocchio himself in the footage just yet.

In the first-look footage, Tom Hanks is hard at work as Gepetto, with his beloved cat Figaro on hand too. He’s crafting the soon-to-be famous puppet Pinocchio, but as always, is very lonely. So, we see him start to make his ultimate wish. But before we see the puppet come to life, we meet his conscience, Jiminy Cricket.

In fact, Pinocchio isn’t seen at all in the footage, beyond just his hand. Instead, audiences get a tease of all the adventures he’ll have, through the eyes of Jiminy Cricket. But there is someone we do get to see: Cynthia Erivo as the Blue Fairy. We even get a few bars of her singing the iconic Disney classic “When You Wish Upon a Star.” 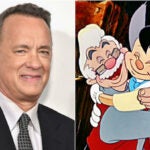 Along with the trailer comes the reveal that “Pinocchio” will hit Disney+ on September 8, as part of Disney+ Day. You can watch the first teaser for Disney’s “Pinocchio” in the video here and above.

Alongside Hanks and Erivo will be Joseph Gordon-Levitt as Jiminy Cricket, Keegan-Michael Key as “Honest” John, Academy Award nominee Lorraine Bracco as Sofia the Seagull, a new character, and Luke Evans as The Coachman. Also in the cast are Kyanne Lamaya as Fabiana (and her marionette Sabina), Giuseppe Battiston as Señor Stromboli and Lewin Lloyd as Lampwick.