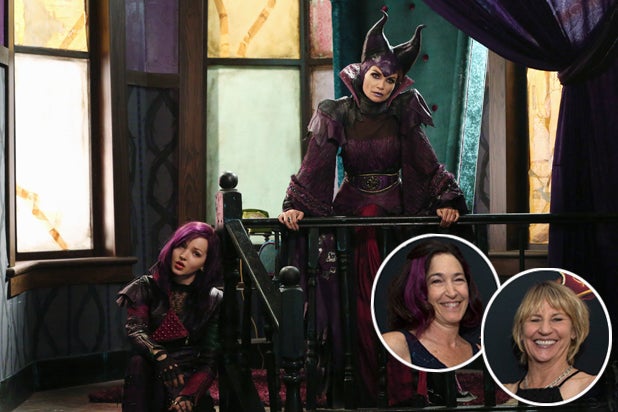 The Disney Channel’s new original movie “Descendants” brings together the children of many iconic Disney characters, no easy feat for screenwriters Josann McGibbon and Sara Parriot.

The writing duo behind “Runaway Bride” and the USA series “The Starter Wife” starring Debra Messing were approached to take on a story surrounding Disney’s second generation and relished the opportunity to re-imagine their favorite childhood characters 20 years later.

In the TV movie, the sons and daughters of four classic Disney villains — Jafar from “Aladdin,” Cruella De Vil from “101 Dalmations,” the Evil Queen from “Snow White” and Maleficent from “Sleeping Beauty” — are freed from exile and allowed to re-enter the fairy tale kingdom of Auradon, where they have to decide for themselves whether or not they want to follow in their parents’ villainous footsteps.

“They’ve been brainwashed essentially,” McGibbon said in an interview with TheWrap. “So they’re taking that framework into this new world and how does that fit? The easy labels are ‘good’ and ‘evil,’ and they have to choose which one they are now that they’re thinking about it for the first time.”

McGibbon and Parriot divulge more about the characters’ choices below:

TheWrap: How did you come to the project?
McGibbon: Well we had a wonderful assistant when we were the showrunners for “The Starter Wife.” His name was Corey Marsh. And then one day, a few years later, Corey Marsh was an executive at the Disney Channel. He called us up and said, “They’re thinking of doing a project with the heritage characters for the first time from the classic movies and you guys would be perfect.” The moral of the story here is to be good to your assistants.

How did you approach bringing together all of these classic stories?
Parriot: They just came to us with the idea that all the villains’ children were together in a boarding school. So they were thinking more of a villain school, but we wrote back saying we thought it would be more interesting if four villains’ children went to a school in an ideal fairyland Auradon. And they really liked that idea, so we went forward with that.

McGibbon: And then the biggest question was, of course, are the villains’ kids good? Or are they bad? And what’s more fun?

How did you decide which of the villains’ children to feature in the movie?
McGibbon: Well we wanted them to be human, so that left out some good ones. But we basically just talked about our favorites movies growing up, our favorite villains. And as much as we would have loved Ursula for example, she’s not really human. We still had some extras left over, but these were the four we thought would serve us the best and were the most iconic and classic and that everybody loved.

Parriott: And then we started talking about things like what kind of parent Maleficent would be. She’d probably be like the tiger mom. And the Evil Queen would be somebody like Honey Boo Boo’s mom. So we sort of had fun saying “Oh, that would be a funny character. Let’s imagine Cruella as a mother.”

McGibbon: We wanted the teenagers to be two males and two females, so we were actually stumped for a minute because we thought we needed two male villains and two females, when we really loved three. And then we remembered that women can have sons. So that was our big breakthrough.

Were there any other characters’ kids you wanted to add, but couldn’t?
McGibbon: There was probably a draft where we went a little crazy and had teenagers running all over the place. Captain Hook’s son and this and that. So we pulled back and thought, “let’s pace ourselves.”

Did you feel obligated to stay true to the characters as they were in the classic movies, or did you see this as your own re-imagining?
McGibbon: We wanted them grounded very much absolutely in who they were, but the fun was that this was 20 years after they’d been in their heyday. They’d been banished without magical powers, so of course they’re different now, based on what has happened in the meantime. So I hope the audience would agree that we’ve been very faithful to who they were. That the Evil Queen is vain and Maleficent is the Mistress of Evil. So we wanted to be faithful to them, but still have fun with who they are now that they’ve been banished for so long.

Is that why the characters so strongly identify as “good” or “evil”?
McGibbon: What we were thinking was that since they’ve rounded up all these people with similar world views, and no one is pushing back on that. So they’ve raised their kids in a way where the teenagers know nothing else. They’ve been brainwashed essentially. So they’re taking that framework into this new world and how does that fit? The easy labels are “good” and “evil,” and they have to choose which one they are now that they’re thinking about it for the first time.

What is the appeal of big crossover movies like this?
McGibbon: Well, I remember when I was young, loving to play pretend with a classic character. This is the grown-up fun way of doing that. You just reimagine them and put them in situations you didn’t get to see them in before. Here are these characters you love and you get to watch them in new situations. You can watch “The Little Mermaid” a hundred times and they’re never going to say anything different. So it’s fun to see these characters live on.

Parriot: It’s a fun idea to pull someone out of a fairytale and put them into a scenario that feels more contemporary, like a high school … What would that be like?

McGibbon: And of course the stars of the movie, the focus is on the second generation. Those are characters that are new. So there’s the fun of repurposing the classic characters, but they’re not the stars, they’re more in the background of the plot.

With Kenny Ortega directing and doing choreography, it’s easy to draw a connection between “Descendants” and “High School Musical,” was that a conscious choice going in?
McGibbon: When Kenny Ortega signed on, we were thrilled that there was going to be a musical element to it, but that came after it was written.

So it wasn’t originally planned to be a musical?
Parriott: That’s correct. Once Kenny signed on to direct, the musical aspect was written in, but it was originally pitched that way. It wasn’t written to be a musical, but it is a musical in the fact that people are breaking out into song a lot. It has that classical musical feel to it.

Do you see it having the same success that “High School Musical” had?
McGibbon: We would hope so, but there’s no way of predicting. I don’t know when we’d have some kind of inkling, maybe when there’s an ice show. That’s exactly what we’re hoping for, but you never know what people are going to spark to.

Also read: Disney Hits $1 Billion at Box Office in Yet Another Speed Record

Is there a plan for future movies, to make “Descendants” into a franchise?
McGibbon: We would just love to be involved and write every single thing that gets associated with this. If it has a life beyond this movie, we want to be there. We love this project, it’s been a long journey getting here, and we would love to be its writers forever.