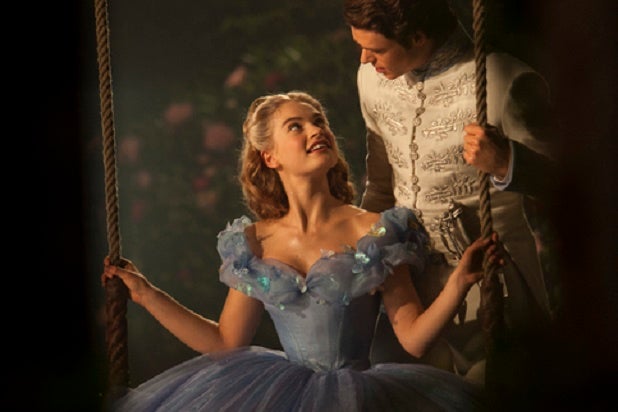 “Cinderella” was the belle of the ball at the box office this weekend, as Disney’s live-action update of its classic animated fairy tale swept moviegoers off their feet with a $70.1 million debut.

That was enough to take the No. 1 spot from “Chappie,” and steamroll the weekend’s only other wide opener, the Liam Neeson thriller “Run All Night,” which managed a soft $11 million.

It also underscored the fact that Disney has yet another thriving film franchise. The studio scored with Angelina Jolie‘s edgy “Maleficent,” which debuted to $69 million last year, and topped that with a bright and bouncy “Cinderella.”

Disney also has an “Alice in Wonderland” sequel and live-action takes on “The Jungle Book,” “Beauty and the Beast” and “Dumbo” in the works. And that’s on top of its Marvel superhero, Pixar animation and “Star Wars” franchises

“Cinderella” dazzled overseas as well. Director Kenneth Branagh’s colorful take on the storybook tale brought in $62.4 million from abroad — including a $25 million opening in China, the best ever there in March — for a $132 million first weekend globally.

Domestically, “Frozen”-fueled “princess power” was in full effect for “Cinderella.” The audience was 77 percent female and 56 percent under 25 years of age. They got what they came for – including a 7-minute “Frozen Fever” short before the film began, too — and gave it an “A” CinemaScore.

That was in line with the critics, who have “Cinderella” at a sterling 97 percent positive on Rotten Tomatoes. “Downton Abbey” actress Lily James played the maiden transformed and Richard Madden her Prince Charming in this version, scripted by Chris Weitz. Cate Blanchett is the wicked stepmother and Helena Bonham Carter the fairy godmother.

Branagh’s faithful and straightforward take on “Cinderella” had none of the singing mice or songs like “Bibbidi-Bobbiddi-Boo” that were in the animated version, and it wasn’t in 3D. But the production design and costumes by Sandy Powell provided plenty of brilliantly bright fun that translated at 358 IMAX theaters and delivered more than $5 million, a March record for a PG-rated 2D film.

The Walt Disney Pictures film is a significant financial score because “Cinderella” was produced for $95 million — about half of what “Maleficent” cost. And no studio does a better job of maximizing profits and capitalizing across its varied business units on its family movies than Disney.

Also Read: Dan Stevens to Play the Beast Opposite Emma Watson in Disney’s ‘Beauty and the Beast’

“I think this film’s success is a recognition of our brand and legacy,” Disney distribution chief Dave Hollis told TheWrap. “We go all the way back to 1937 with ‘Snow White’ and I think people understand that these classics are in our DNA.”

The fact that so many business initiatives, from licensing and merchandising to theme parks and beyond, are driven by hit movies mobilizes the Mouse machine, he said.

“Our people have been excited about this movie for a long time, and it’s great to see it happen,” said Hollis, who pointed to the peripheral profits from “Frozen” as evidence of how well the company’s synergy strategies work and saluted the marketing team and creative teams behind “Cinderella.”

“When you do a totally faithful version of a timeless classic that everyone knows, it raises the bar in terms of getting people excited,” he said.

“Cinderella” helped stop a two-week skid for the overall box office, which topped the comparable weekend last year by 17 percent. The year is running 4.4 percent ahead of 2014, with a run of would-be blockbusters on the way. “The Divergent Series: Insurgent” opens next week and the cars-and-criminals saga “Furious 7” opens two weeks after that.

The disappointing opening for “Run All Night” suggests its star Neeson may be losing some of his action star punch.

The debut of the Jaume Collet-Serra-directed crime saga is under that of Neeson’s “A Walk Among the Tombstones,” a similar thriller that fizzled in its September opening with $12 million. And it is less than half the openings of Neeson’s “Non-Stop” ($28 million) and “Unknown” ($22 million), two other action films in which the actor teamed with Collet-Serra. Even January’s “Taken 3,” the last entry in his signature vengeance franchise, failed to connect like its predecessors and has topped out with $88 million domestically.

It was offered as a counter play to the female-skewing “Cinderella” by Warner Bros., but missed the mark with males, drawing an audience that was 52 percent female, with 86 percent over age 25. They liked it, and gave it an “A-“ CinemaScore, but the critics weren’t as impressed and have it at 59 percent positive on Rotten Tomatoes.

“Kingsman: The Secret Service” was third with $6.2 million. The Colin Firth spy spoof dropped just 28 percent in its fifth week and has now taken in $107 million domestically for Twentieth Century Fox, and more than $257 globally.

“The Second Best Exotic Marigold Hotel” also held well and finished fifth with $5.7 million and was sandwiched between two former No. 1 movies. The Will Smith caper comedy “Focus” was just ahead of it with $5.8 million for Warner Bros. in its third week, and the Neill Blomkamp-directed sci-fi tale “Chappie” was just behind in sixth place with $5.4 million for Sony Pictures in its second week.

Warner Bros.’ blockbuster war saga “American Sniper’ fell out of the top ten for the first time since mid-January.