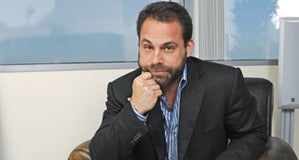 Word that David Bergstein and his Pangea Media Group may emerge as the top bidder for Miramax has been greeted with shock throughout Hollywood — particularly among his score of high-profile creditors currently involved in a court battle to get paid.

Last month, as part of an attempt to force the distributor into chapter 11, a bankruptcy judge appointed a trustee to oversee Bergstein’s cash-starved ThinkFilm and constellation of questionable business entities. The allegations of financial impropriety and mountain of unpaid bills that dog Bergstein make the possibility that he may outbid The Weinstein Company and Platinum Equity for Walt Disney’s art house division jaw-dropping indeed.

"The notion of David Bergstein being perceived as credible bidder is so fantastic and at odds with reality, it is only usurped by speculation that he or  the entity backing him could be successful and close this transaction," Jeff Sanders, an attorney for the creditors, told TheWrap.

A message left for Michael Barnes, Bergstein’s attorney, was not returned and a spokesperson for Disney declined to comment.

Would anyone — let along a global media giant of Disney’s caliber — trust a business person of Bergstein’s reputation to come up with the hundreds of millions of dollars necessary to get the deal done, even if he is reportedly being backed in his offer by Deutsche Bank and a Saudi Arabian investor?

Here’s a look at some of the flashing red alarm signs that should be going off in Burbank as negotiations race toward the finish line.

1.) "The Enron of the entertainment industry": To borrow words from creditors attorney David Neale’s opening remarks in a Manhattan courtroom last month, the series of shell companies and structured transactions that Bergstein allegedly used to defraud creditors does bring to mind a certain now defunct Houston-based energy commodity trading company.

So byzantine were the web of companies, that after Bergstein’s company Capital Films was put in administration, the first company to bid on its film library was Veritum — which, conveniently, happened to be controlled by Bergstein.

2.) "Count the bills, before the deal is done": Talking a good game was never Bergstein’s problem, according to one individual with knowledge of the ongoing litigation, it was coming up with the cash to back his deals that was always his undoing.

"Here’s a guy who can’t pay 600,000 for a film he bought three years ago, and he’s going to come up with half a billion to buy Miramax," Sanders said. "How can anybody take that credibly?"

If the suit by creditors is to be believed, beyond being perpetually short of cash to pay everyone from filmmakers to his own agent, Bergstein’s company failed to perform such perfunctory tasks as implementing proper accounting systems and remitting payroll taxes to the government. Adding to the chaos, Bergstein purportedly went through chief financial officers like tissue paper, as many as five different CFOs in 22 months.

3.) A who’s-who of P-O’ed creditors: Among the list of companies and directors supposedly still waiting to get paid by ThinkFilm or Bergstein’s other companies are the Screen Actors and Directors guilds of America, Allied Irish Banks, the U.K. Film Council, and directors Gregory Nava and Taylor Hackford. Comerica Bank alone is owed $76 million. They’re probably not going to be too happy to see Bergstein turn around and buy a major Hollywood studio while they’re still waiting for their money.

4.) Keep Davy away from the roulette wheel: Bergstein clearly hoped that what happens in Vegas stays in Vegas. Sadly, litigation has a nasty way of turning up some very dirty laundry. Among the more outrageous charges is that the distributor used one of ThinkFilm’s entities’ bank accounts as collateral to obtain loans from a casino to fund his personal gambling. Bergstein supposedly got more than $950,000 from Mandalay Bay Resort in exchange for these, shall we say, unorthodox markers.

5.) Uncle Sam can help with the accounting: Pangea Media Group is one of the business entities mentioned in creditor filings, which means it probably won’t be immune to the forensic accounting about to take place. The court-appointed trustee is liable to sift through that company’s finances as they follow the money trail to figure out if any of the tens of millions of dollars ThinkFilm still owes is being funneled into financing his next venture.

That means that Disney’s legal team may get lots of unsolicited assistance in poring over Pangea’s finances.